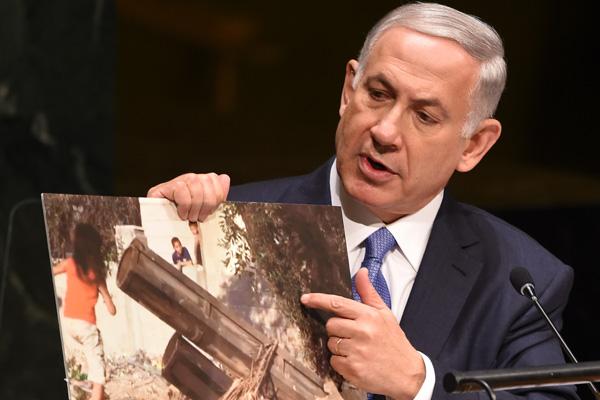 
Our challenge is to transform these common interests to create a productive partnership. One that would build a more secure, peaceful and prosperous Middle East. Together we can strengthen regional security. We can advance projects in water, agriculture, in transportation, in health, in energy, in so many fields. I believe the partnership between us can also help facilitate peace between Israel and the Palestinians. Many have long assumed that an Israeli-Palestinian peace can help facilitate a broader rapprochement between Israel and the Arab World...
...That’s why in any peace agreement, which will obviously necessitate a territorial compromise, I will always insist that Israel be able to defend itself by itself against any threat. (emphasis mine)

I can't find any statement in his speech to make me believe that he has given up on the "Two State Solution." I also don't like the fact that he referred to Mahmoud Abbas as "president."

I don't see what Deputy Transportation Minister Tzipi Hotovely (Likud) is so sure is a change in policy.

Maybe her English isn't that good or she's just reading her own thoughts into her boss's speech. The Arutz 7 reporter should have asked her to quote the words on which she's basing this assumption. Sorry Charley, but I just don't see it.

Even my good friend Ruthie Blum and I don't agree about the value of Bibi's speech. I found her Israel Hayom article,  Words Matter, too optimistic. I even dared to call her a "moderate" in our public facebook discussion.

For me, the unabashed purist/extremist I need to hear two very simple things from our Prime Minister. I want steps and conclusions from the observations he makes so very clearly in his foreign speeches:


Honestly, yes, again, just call me an "extremist," I consider our membership in these bodies a dangerous waste of our limited resources.

And after that we must take action against the countries that don't recognize Jerusalem as Israel's Capitol City and start moving all of our foreign embassies to cities of our choice, just like they've done to us.
Posted by Batya at October 01, 2014

you are NOT an extremist. Simply basic common sense- which tragically has not been part of mainstream Jewish thinking for a long time now.