Proclaiming the Truth in Face of the Lies!

Another gem from R. Menachem Brod (pictured below), from this week's Sichat HaShavua of Chabad, Number 1450 - translated by Yitz:


Proclaiming the Truth in Face of the Lies
Weekly Op-Ed, by Rabbi Menachem Brod 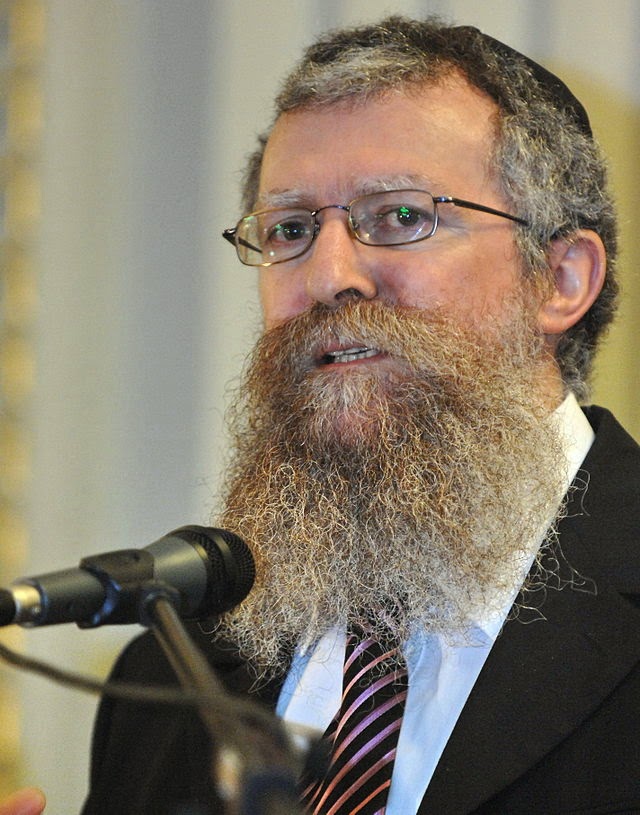 We are living in an upside-down world: Those whose views are based on lies and deception, declare those lies with full power and determination; while those on the side of truth and justice, avoid using them, or at most feebly express them.

Recently, we heard the speeches at the United Nations and the statements that accompanied them. The Arabs continually repeated the blatant lie that they have been the residents of the Land for about three thousand years, while the Jews are foreigners and occupiers. Why would they lie so much? Why not stick to the claim that they represent a population that seeks self-determination?

It is because they understand besides pragmatic arguments, they also need to establish a sense of justice. If this Land is not theirs, the pragmatic arguments lose weight. One cannot argue that his neighbor should give him part of his apartment, on the grounds that he has a large family, while his a neighbor lives alone in a big house. If the house is not his, the needs of each and every individual (great as they may be) interest no one.

Return to our rights
On the other hand, we have almost completely abandoned our claim of justice and rights, while talking again and again about security needs. There is no doubt that security is a crucial consideration, since there is nothing more important than securing life and saving lives [in danger], but our security interest cannot be detached from our moral justification and the questions of justice and rights.

If the security argument becomes the only element in our thinking and explanation of our position to the world, it is doomed to failure. When one side makes their argument of values and maintains its right to the Land, while the other holds onto security reasons, the outcome will be the defeat of the latter. Solutions will be offered to the security questions, but they will seek to give the other side what appears to be right and just. So we have to remember the principle roots of our moral and ethical rights to this Land.

It is not occupied
This Shabbat, when we read Parshat Breishit (the beginning of Genesis), we should we take a peek in the words of Rashi, in his very first words of commentary on the Torah. Rashi brings a question to the very fact that the Torah begins with the story of Creation. Because after all, this is not self-evident - the Torah is a Book of Laws of the Jewish People; apparently it should have begun with the first Commandment that the Jews were commanded. The answer is amazing: the story of Creation is designed and brought to establish our right to the Land of Israel!

Indeed, Rashi says in the name of Rabbi Yitzchak: "If the nations of the world say to the Jewish People: you are thieves, for you have conquered the Land of the seven nations, they can reply: All of the earth is G-d's; He created it and gave it to those about whom He felt justified. He willingly gave it to them, and He willingly took it away from them and gave it to us." In other words, through the story of Creation, the Torah equips us with a convincing reply to the Gentiles’ claim of conquest: "You are thieves, occupiers, and conquerors."

Hence we have a moral right, just and unparalleled, to the Land of Israel. When we sit in Jerusalem, Hebron, Elon Moreh and Shiloh, we are doing what is most right and just - the Jewish People's return to its home, its country and its inheritance. This truth needs to be heard again and again, with determination and confidence, and we shall win. 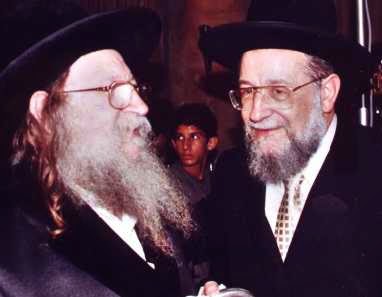 I would just like to point out that several years ago, the previous Modzitzer Rebbe (pictured above with Rav Lau Shlita; the Rebbe passed away in 2006) asked regarding the verse that Rashi cites (in the above commentary) from Tehillim (Psalms 111:6). The verse says, “The power of His works He declared to His People, by giving them the inheritance of the nations.” Since it was the nations of the world that are claiming the Jews are thieves, the verse should say that “He declared to the nations,” rather than to His People.

The Rebbe informs us that we learn from this that the Jewish People themselves need to be secure in the knowledge that the Land of Israel is their portion from G-d. Once they know this, the nations will also know. But if the Jewish People are unsure of this, there is no way that the nations of the world will be able to accept this. We saw the same idea expressed in the Egyptian exile, when Moshe Rabbeinu claimed that the Jewish People weren’t listening to him, so how can we expect Pharaoh to listen? (Shemot/Exodus 6:12).
Posted by yitz at October 18, 2014

Jews have rights - like the right to be in their country.

They have unfortunately the habit not like they are people proud of themselves but that they are like people who constantly apologize for offending the world.

If the Jews themselves believe they have no right to be in the Land Of Israel, who are others to argue with them?

That is why is Israel is losing friends abroad and is on the defensive at home. No one likes a wimp.

Yitz, thanks for posting.
Norman, amen