After a very dry early winter, the rabbis requested that we urgently pray for rain.  Certainly some of us did pray.

It has been raining all week.  And it is getting colder and colder.  Those intrepid ones in the mountainous areas of Israel who leave home very early in the morning report ice on the sidewalks and streets.  Yes, it's getting dangerous.  I didn't notice any ice when I left home this morning at 6am, but it really has been raining.

When we pray for rain, we ask that it be in quantities that would make it a blessing, not a curse.

Actually, the rain started last week, soon after we began to add the prayer to beg G-d for the necessary precipitation. I slept in Hod Hasharon Wednesday night, and very early Thursday morning we woke up to buckets of rain, or high-powered water hoses pounding the roof.  At least that's what it sounded like.  It was the rain.  Since then it has been raining on and off.  And when it rains it rains. The Jerusalem Big Blue Lions and Judean Rebels and their fans were lucky that G-d decided to take a break for their opening game on Thursday night.  That made it safer for their players especially the guest forward Uriel Wang who scored an unforgettable touchdown.

Now the Israeli Chief Rabbis have instructed us to thank G-d for His generosity and stop the special prayer for rain.  I hope they haven't jumped the gun and made the decision prematurely. We need lots more than one humongous gevaldik rainstorm. 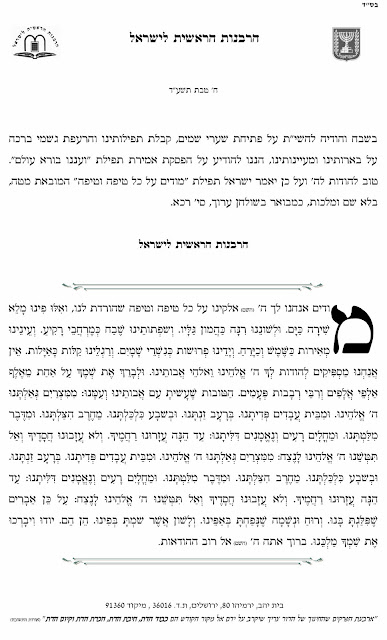 According to the local Shiloh rainfall expert, Rabbi Dov Berkovits, davka Shiloh has received relatively a lot of rain.  I just checked the Israeli meteorological site and we (Israel/Jerusalem) are not ahead of a normal year.

We're going to need more weeks like this one.  And we certainly do need breaks in between the rainfall with full sunshine and warmer weather.  To get the weather that will be a blessing and not a curse, we must still pray to G-d and never take for granted that G-d won't punish us.  Today I was listening to a shiur (class/lecture) by Dr. Yael Ziegler about King Solomon.  She said that it had never occurred to him that G-d may punish the Jewish People by allowing the Beit Hamikdash, Holy Temple to be destroyed.  King Solomon was overconfident.  I think that our government has the same mindset as King Solomon, and that has me very worried.

Our rainfall and weather are controlled by G-d, so we must live according to G-d's commandments.
Posted by Batya at December 11, 2013

if you go here, you can see the rain amounts

Here in Nitzan on the coast (near the "115 mm" on Batya's map) between Ashkelon and Ashdod we've received slightly more than average so far. Right now we're being pounded by rain and very strong winds. Who ever thought I'd be discussing the WEATHER on Shilo Musings and not ideology, politics or arab threats - Baruch Hashem.

Wink, thanks
Yosef, in the Holyland, rain is politics. Isn't it?
a, amen

I forgot - once upon a time Jordan accused Israel of "stealing rain" because we were doing some cloud seeding.

Yosef, we must be magicians, nu?