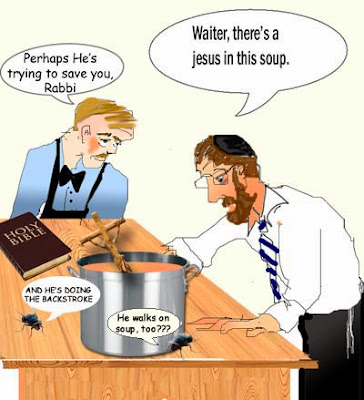 In addition to its offices and numerous shops, Mercaz Clal on Jerusalem's Jaffa Street serves as a sort of "messianic central" with a very active, top to bottom Christian missionary presence under the auspices of King Of Kings Community (KKCJ).
But the location recently became somewhat like "comedy central" when a member of the staff of the KKCJ affiliated Café Forte, allegedly tried to missionize the restaurant’s kashrut supervisor. This activity reportedly resulted in the withdrawal of the Rabbinate's kashrut certification from the premises.
Café Forte may be a new venture but new testaments and proselytizing over coffee at the Clal Center are an old story. JewishIsrael has an update that takes some very intriguing twists and turns...more
Posted by Ellen at December 06, 2013

Ellen, thanks so much for posting this very important message. Unfortunately the coffee shop looks very tempting, clean and attractive in the rather down in the dumps downtown mall.

I had not idea! Thank you Batya for bringing this to my attention and Ellen for posting.

How about a countermissionary flashmob passing out antimissionary tracts and singing every once in a while, give them a dose of their own medicine, happy, love, no anger.

Thank-you for the posting...I will share your important information.