Dry Bones sums it up perfectly, as usual.

He just left out the heavy-handed American pressure, which he mentioned in the cartoon below.

The State of Israel can't rely on any foreign power or even World Jewry for help and support, but that's not new.  We can't even rely on our own politicians to promote what's best for Israeli security.  Knesset Speaker Ruby Rivlin made a great rousing pro-Jerusalem and settlements speech at the official Independence Day Ceremony, but he has no real power.  It's all window dressing, no more influential than the flags I've hung on my merpeset (balcony.) 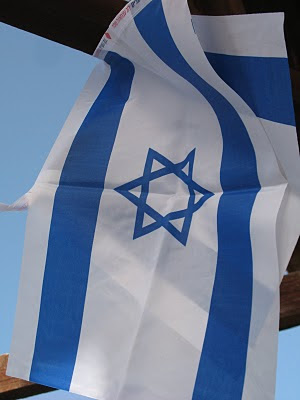 Unfortunately your average Israeli is impressed and comforted by these speeches, forgetting that they are no more than words.  Even if I have no doubt that Rivlin was totally sincere  and not acting, it makes no difference.  All the pro-Land of Israel Israelis, including the Feiglin Manhigut Yehudit crowd, who voted for the Likud just got us Ehud Barak, who's an extreme Leftist dressed in IDF army fatigues.  Binyamin Netanyahu may be our Prime Minister, but we're not getting the Likud platform.  Kadima's Tsippi Livne may be in the opposition, but we're stuck with her and Labor's policies.
I don't want to leave you with a depressing Israeli Independence Day post.  That's not what I planned when I sat down here this morning before the sun was high in the sky.  Contrary to what Israel's media and politicians want us to believe, most Israelis understand that without our Land we are nothing.  Without our Land we aren't safe.  Petach Tikvah, Ramat Gan and Kfar Saba are minutes from the proposed Pseudostinian aka Palestinian sic state.  These Israeli cities won't be safe if Israel doesn't fully control the Land we have to the Jordan River.  Shiloh protects Tel Aviv.
The State of Israel is sixty-two (62) years old.  The Six Days War was just after it turned nineteen (19.)  The math is simple.  For more than two-thirds (2/3) of its existence as a modern independent state, we have been in control of Judea and Samaria.  That's the key to our continued survival.  Without our historic Biblical Land we couldn't have survived these past forty-three years.  Without our long history, we wouldn't exist at all.
Ironically, the front-runner to win today's International Youth Bible Contest is Avner Netanyahu, the youngest child of Prime Minister Bibi Netanyahu.  At fifteen (15) he's two to three years younger than most of the finalists, and unlike most Israeli contestants he studies in a non-religious school.  According to the press, he has been tutored by his grandfathers who are history and Bible experts.  Maybe he should be tutoring his own father.
Over the millenium, Jewish History has never followed the laws of logic, therefore it's best not to attempt to predict the future.
חג עצמאות שמח
Chag Atzma'ut Sameach
Happy Israeli Independence Day
Posted by Batya at April 20, 2010

Avner Netanyahu no doubt is influencing his father in some way..... and as it says "before Moshiach, the children will teach the parents".


You keep on repeating the same nonsense.

Repeat the following fact after me:

All those who voted for "Ketzelah" got Bibi because Ketzeleh himself asked that the government be formed with Netanyahu as the Prime Minister.

As if you would have been happier with Livni & Barak. Who are you fooling? You'd have been relocated to some empty field by now, blogging from your very own caravilla. Unless, of course, there aren't enough caravillas to go around. In which case, you would have been sharing it with another family or two.

In the meantime, while you play pin-the-tail/tale, it's the Manhigut leaders and members who are running around the country to work on the members of the Likud's Central Committee to not support Netanyahu's 4/29 attempt to rewrite the Likud Charter and cancel the elections for Central Committee elections.

Should Netanyahu succeed, you'll wish you were only in a "freeze".

In the meantime, enjoy your glass of whine, sipped slowly.

Shy, we're never going to agree on this, since it's impossible to prove what would have happened if...

The one certainty is that the Likud is/has always been more Right, pro-settlement and Land of Israel when in the opposition. That's why all of the really bad stuff like Begin's Camp David and Disengagement were Likud policies.

Yes, but how would things be if the Likud would be just as much in the right when it's leading the government.

That is precisely the goal and what's preventing it is the disconnect between the party bosses and the party's rank and file.

Did you burn your house down to kasher it for Pesach or did you just throw out the chometz trash?

Shalom!
But Shy Guy, Feiglin isn't making enough progress in the Likud. Bibi and like minded people will always block Feiglin. Wouldn't it be better for Feiglin to team up with Katz and attract right-wingers from the Likud, voters and politicians? It's a real shame that Hotobeli has been swallowed up.
The problem with the Netanyahus is that to them, the Bible is at best history, at worst legends, and history isn't teaching them enough about what the future should be. Knowledge isn't useful if it remains facts in the head and not facts on the ground.

Hadassa, so how are your efforts to stifle the Likud elites doing?

How about Katz's and Ben Ari's efforts?

You're wrong again. If Netanyahu loses the measure he wants to ram through next week, it's a big setback for him and will give a tremendous lift to the Central Committee's makeup when their election comes up soon thereafter.

And the craziest thing is that the Likud's committee election rules make it easier for Yesha residents to become central committee members than any other part of the country. Less votes required to win and more representation per population total.

60 years of me-too opposition parties and you haven't learned anything yet?

Don't you want to lead the country?

And then when everyone goes their own way, they complain that Feiglin isn't making progress. No fooling. In order to make progress the people have to back him.

But keep on begging for crumbs. It's really worked out great for us all until now, hasn't it.

I believe a major cause of our problems as a nation is shown right here and now on this blog. We don't have enough achdut...

It's like the old (sad) joke: the 2 shipwrecked yidden have 3 shuls: mine, yours, and the one nobody davens at. Sadly, until we change that, we'll still have the same smooth talking slick politicos running our nation.


BTW, Avner has the mouth, and charisma to be like Papa bear somewhere down the road. If he gets there, I just hope he does more than talk like some others I could mention.....

Shalom!
Shy Guy, could you please explain to me exactly how Feiglin is going to reach a "realistic" place in the Likud line-up? He finally reached one, and then he was knocked back, legally. Could you please explain to me how the Likud can be a fertile ground for genuine right-wingers when even Tzippi Hotobeli has left her principles and fallen in step with the party line? It's time for right-wingers to leave the Likud and not fool the public any more. No more fig leaf for the Likud!