Being A "Real Israeli"

One of my pet peeves, those things people say which press the "wrong button" is when I hear "olim," immigrants, and "Israelis" referred to as two different categories of people here in Israel.  I first heard it about thirty years ago from an Abie Nathan groupie when some friends and I were demonstrating against his hunger strike.

The groupie began calling out to passersby:


"Don't listen to them; they're not real Israelis."

I was outraged and marched into Nathan's tent to ask him if he thinks Israelis with accents (obvious immigrants like myself) aren't real Israelis.  He seemed genuinely upset by what the young groupie had done.  Making aliyah, choosing to live one's life in Israel should be considered on a higher level than those who were just born here, like an accident of fate.

Here I am decades later still with accented Hebrew.  We'll soon be celebrating forty years in Israel, though I may not sound very Israeli.

Many people say that there's an "express lane" to being an Israeli.  It's not a pleasant road.  This week we'll be celebrating Israeli Independence Day which is preceded by Soldiers and Terror Victims Memorial Day.  Losing a family member or close friend in war, army action or terror attack introduces us to a different level of the Israel experience. 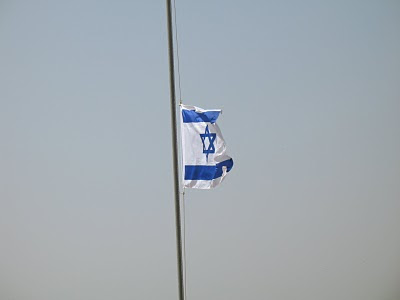 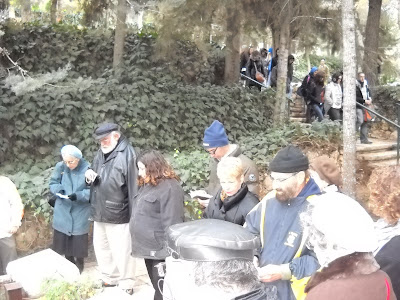 Shalom!
I've heard that serving in the IDF is also a way to become a "real Israeli". When are we going to be able to unite for a common cause instead of against a common enemy? Why is suffering the only bond?
P.S. I bet that that groupie considers Naomi Hazan to be a real Israeli. Hypocrisy.

The army does it for some, but it's not something we can all experience.

Shalom!
Do you agree with the suffering aspect? I find it interesting that the two most prominent ways known to become a "real Israeli" involve the armed forces. IMHO building Israel together should be the biggest bond.

Like an "initiation rite?" Remember the stories of the Holocaust survivors sent from the boats to the front lines?

Shouldn't it be giving birth in Hebrew? I could barely speak when I had my first child in the old Shaare Tzedek Hospital.

I guess being an Israeli is a "life-death" mix. That's why we have Independence Day connected to Memorial Day.

The problem is that those of us with accents have to "pull out our badges" to get recognized as memebers of the club.

Thanks for the memories:

On the evening of December 8, Peres came to a Shas banquet at the Jerusalem Ramada Renaissance Hotel. He was greeted by about a dozen demonstrators who blamed him and the government for the murder of the two Lapid men near Kiryat Arba two days earlier, because they [Peres etc.] had branded all the Jews there as anti-Arab provocateurs.

Peres turned to the leader of the group, Ruth Matar, organizer of Women for Israel's Tomorrow, and asked her angrily in Hebrew: "Where are you from?"

The Austrian-born Matar, who is a Holocaust survivor, lived in the US and 18 years ago came with her husband and four children to live in Jerusalem, gave her organization's name in Hebrew. Apparently detecting her Anglo accent, Peres switched to the Polish-accented English in which he defends the "Piss Process" before the foreign news media, and demanded angrily: "No, where do you live?' Matar [in Hebrew]: "Yerushalayim." Peres: "No you don't! You don't belong here! Go back where you came from!"
----------

p.s. When was the last time you saw the use of a term, such as "capitulation process", in a Jerusalem Post news article? Memories......

Yes, we're in good company. I had never thought of Ruth Matar as "American" until Peres's rude remark. Her brother and family did a lot for me when I was becoming religious. In our community they were considered Israelis.

A "real Israeli"? Come on! Israeli doesn't have Jewish meaning any more with 25% of Israelis non-Jewish.
I made aliya to fulfill the mitzva to live an authentic Torah true life. Israeli defines my citizenship.


Ruth Matar wasn't born in Israel?? Never would have guessed that at all.

If you live in Israel and have citizenship your a real Israeli.

I think there's some discrimination though towards who have not been born there, though.


Accents matter, unfortunately--in Israel and in Judaism in general:( My inability to pronounce certain words or sounds, will always mark me as a stranger in a strange land.

Now I feel a bit guilty reading this post. I remember IMing with audio with a rabbi I know who made aliyah. I love the sound of Hebrew and kept asking him to say "Israel" with an Israeli accent, "like a real Israeli." I feel bad for saying that!

Many Israelis are immigrants, including those who think others aren't "real Israelis." It's a mindset. We don't hear our own accents.

Shalom!
Having Jewish children in Israel is a form of building.

IMHO an Israeli is a Jew who lives in Israel. There are native-born Israelis and immigrant Israelis. There are no non-Jewish Israelis being as non-Jews are halachicly not citizens of Israel.

Anonymous, take some comfort in the fact that the non-Jews who snuck in, or were recruited by the Jewish Agency with Peres' "blessing", aren't reproducing at anywhere near the rate that Tora observant Jews are.