It's the former English Teacher in me kicking in again.  Remember that "a" is "one of a potential many."  Most people don't understand the meaning of "a" and "an."  Calling it "an article" doesn't give an answer.  You have "articles" in a newspaper or magazine.  A blog post is a form of article.  When I began teaching English I had yet to be "trained" in the profession, so I had to search well within my mind and experience to figure out how to explain things to my students, who had been the school's failures until I got them, or they got me.  I realized that "a" and "an" were like the "un," "uno" and "una" in Spanish.  Those words are simply translated as "one," "1."
United States President Obama overuses the term Holocaust, considering it no more than a synonym for "pogrom."  One must remember that he was raised by an extreme loony Left mother who married foreign men of different religions and cultures.  She also lived in their countries for portions of her life.  The chances are that Obama has no idea that he's historically incorrect, mistaken.
Googling "Holocaust" I found it as "The Holocaust," because it's the term for a very specific historic event, the German Nazi persecution and systematic murder of Six Million Jews and millions of others.
It's pretty dangerous for the United States to have a president so intimately entrenched in extreme Left ideology. 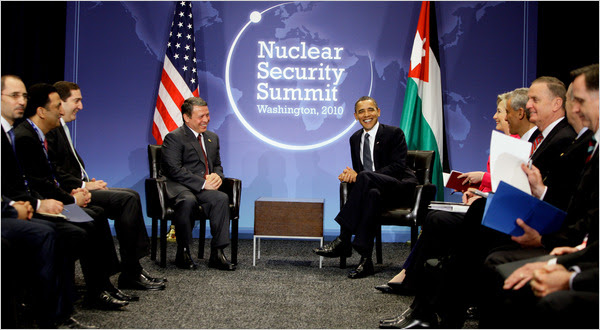 Obama's statement at his Nuclear Security Summit about committing to limit nuclear weapons may sound good to cockeyed Pollyanna optimists (international loony Left,) but what it does is to destroy all remaining deterrent.  The "good guys" tie their hands to get progressively weaker, and the "bad guys" keep on developing weapons of destruction.  How is that supposed to promote world peace?
Posted by Batya at April 13, 2010

Fascinating article, Batya! Now that I think about it, referring to the Shoah as The Holocaust could well be an attempt to dismiss it.

An attitude of Jews being murdered throughout history but only one holocaust. It's a distancing tactic. People distance themselves from the possible murder of 7 million Jews in Israel today by repeating the denial that there was and only can be one Holocaust.

THE Holocaust, the one 60 years ago. The one that can never happen again...even as we watch the foundation for another one right before our eyes.

Thanks
But Keli, I don't quite follow. The term holocaust means the "Shoah." There have been many pogroms and massacres, but only one Holocaust.

Sorry for the confusion:( What I mean is, the Shoah, the genocide/murder of 6 million Jews by Hitler's regime is a historical event, of course.

When people refer to The Holocaust/The Shoah as only one atrocity decades ago they typically are oblivious to other atrocities.

By singling out the Shoah from all other attacks and murders of Jews --systematic or otherwise--throughout history makes it quite easy for people to mourn the 6 million and be oblivious to the threats of Iran and other threats with a body count less than that in the Shoah.

They can mourn the Shoah and support the expulsions. They can weep for Anne Frank and ignore shell shocked and murdered kids in Sderot.

Does only the mass murder of 45 years ago merit outrage and designation as a holocaust? What about the massacre of the young yeshiva students in Jerusalem?

Does a holocaust have to take place in a specific time, say 5-10 years or longer, for example, what is the number of Jews killed since Oslo?

Sigh. I AM confused.

Keli, if I'm not mistaken "The Holocaust" was termed to title the systematic murder of millions of Jews by the Nazis. Other atrocities have different names.

TY. I understand what you meant, now:)

Shalom!
The following is a link and a quote from wikipedia. I am going to try to look at other sources also, partly to verify what's written in wikipedia.
Could it be that since the Nazi holocaust of WWII there is only one Holocaust, but numerous holocausts?

The term holocaust originally derived from the Greek word holókauston, meaning a "whole (holos) burnt (kaustos)" sacrificial offering to a god.[8] Its Latin form (holocaustum) was first used with specific reference to a massacre of Jews by the chroniclers Roger of Howden[9] and Richard of Devizes in the 1190s. For hundreds of years, the word holocaust was used in English to denote massive sacrifices and great slaughters or massacres. During World War II, the word was used to describe Nazi atrocities regardless of whether the victims were Jews or non-Jews. Since the 1960s, the term has come to be used by scholars and popular writers to refer exclusively to the genocide of Jews.[4]

The term entered common parlance after 1978, the year that the popular Holocaust (TV miniseries) was broadcast on the American NBC television network. With a cast of dozens, including a young Meryl Streep, this miniseries was sometimes accused of "trivializing" the concentration camps. However, the series proved that the subject matter could have popular appeal, as well as providing a convenient and enduring term.[10]

The biblical word Shoah (שואה) (also spelled Sho'ah and Shoa), meaning "calamity," became the standard Hebrew term for the Holocaust as early as the 1940s.[11] Shoah is preferred by many Jews for a number of reasons, including the theologically offensive nature of the word holocaust, as a Greek pagan custom.[12]
Historical usage of Holocaust, Shoah, and Final Solution

The word holocaust has been used since the 18th century to refer to the violent deaths of a large number of people.[13] For example, Winston Churchill and other contemporaneous writers used it before World War II to describe the Armenian Genocide of World War I.[14] Since the 1950s its use has increasingly been restricted, with its usage now mainly used as a proper noun to describe the Holocaust perpetrated by Nazi Germany.

thanks, I guess it's "The Holocaust;" capitalize the "T" in the, too.