Did I Hear Right? 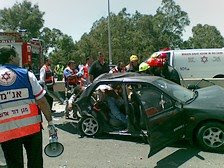 Last night, on the way back from the wedding, before being dropped off at the "trempiada," our bus stop/hitchhiking post, the midnight news went on.

It was said so deadpan, like the weather report.

They weren't all killed in the same accident; four in one, two in another and three in a third.

Now, searching the Jerusalem Post homepage for details, which were not in the top headlines, I saw:

Death toll on the roads reaches 10 in 24 hours

Think about it. Bad driving, here in Israel, by Israelis, local Arabs and tourists, causes more death and injuries than the Arab terrorist-launched kassams. Is that why the Israeli public is so apathetic, so accepting of the Arab terror? What happened to our valuing life?

What has happened to us?

Why don't we hear the primal scream of pain and outrage?

Why aren't we screaming and fighting the injustice?

What is wrong with us?