The Best of Zionism!

Whoever says that Zionism is "dead" and we're in the era of "Post Zionism" is wrong, totally and utterly wrong!

Last night, in Ir David, the City of David, near the Walls of Jerusalem, we attended the Moskowitz- Zionism Prize Giving Ceremony.

A few months ago, notices appeared in the media requesting nominations for those deserving to be awarded for their Zionist contributions. Within a very short time, hundreds and hundreds of nominations were sent in. Three winners were chosen.

Rabbi David Fendel, head of the Hesder yeshiva in Sderot, "for the values of community involvement and commitment to the nation and the Land that Rabbi Fendel has instilled in hundreds of his students; for his yeshiva serving as a source of strength for all of Sderot's residents especially in these most troubling of times; for his actions, which make him a role model and Zionism leader."
Mr. Moshe 'Moshko' Moshkowitz, visionary and builder of Gush Etzion communities, "for over sixty years of activity and dedication in the areas of education and settlement; for his personal role in the establishment of communities and educational institutions throughout Israel, and particularly for his central role in establishing and making the communities of Gush Etzion prosper."
Brig.-Gen. (res.) Ran Pecker-Ronen, a highly decorated former Israel Air Force pilot and founder of the 'Tzahala' project, "for epitomizing bravery, self-sacrifice and leadership, for his outstanding approach to the educational and societal challenges facing Zionism today, and for his successful project "Tzahala", based on the volunteerism of former army officers at the forefront of social involvement with Israel's youth." 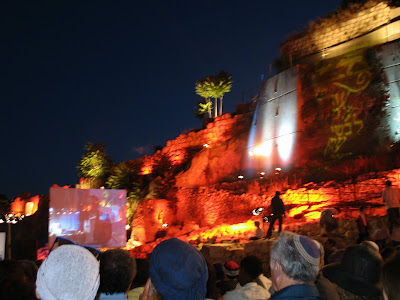 It was a well-produced, thrilling ceremony, which included popular Israeli singer, Shlomo Gronich. I didn't enjoy some of his songs, which were about "Peace." 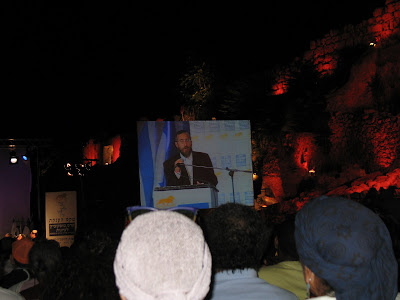 The Moskowitz Prize for Zionism was established by Dr. Irving and Cherna Moskowitz in recognition of the people who put Zionism into action in today's Israeli society – at times risking their own personal security, placing the collective before personal needs, and doing what it takes to ensure a strong, secure Jewish homeland.