Synonyms of 'apartheid'
2 synonyms - Roget's II: Thesaurus
•
The policy or practice of political, legal, economic, or social discrimination, as against the members of a minority group: segregation, separatism.

Other definitions specify that it's only apartheid if the group discriminated against are black Africans.

apartheid - Apartheid is a strict system of racial segregation and discrimination in South Africa against black South Africans. "Apartheid" is the Afrikaans word for "apartness." (Afrikaans is the official language of the Boers, or Afrikaners.)

That makes me wonder. If a different racial, national or religious group is forbidden to live and work in certain places, is it immoral, apartheid or perfectly acceptable, even to the extent that Nobel Peace Prizes are given to its proponents?

Why is it against American Law to restrict housing only to certain races and religions in Jericho, Long Island, New York, but the same moralists and legislators have no problems restricting Jews from the original Jericho?

Actually the Nazis had a term for that, "Juden rein," clean of Jews. That was their goal, to make a Europe "clean of Jews." They failed, but now the new French President unabashedly proposes:

Sarkozy: "Move Jews Out of Judea and Samaria"

Ironic. He, with the Jewish blood and soon to be Jewish daughter-in-law, sees nothing wrong with segregating and discriminating against Jews. Yes, I know that Israeli and other Jewish Leftists feel the same, but does that make it right? Not at all. 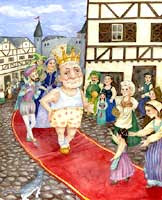 We're living a classic children's fable, The Emperor's New Clothes. We all must shout along with the little boy who wasn't afraid to tell the truth.

Too many people who pride themselves on their "liberalism" and "morality" are as naked as that foolish emperor was.
Posted by Batya at June 23, 2008

You nailed it again.

I'll tell you I despise Jimmy Carter and his a**-kissing of Arab Muslims, and his obvious anti-Semitism.

There is NO comparison between African Apartheid and Israel vs. "Palestine". It's just nonsense.

Darlin' the only ones discriminated against here are Jews, and the world is.. silent! Wrong I am, the world is applauding.