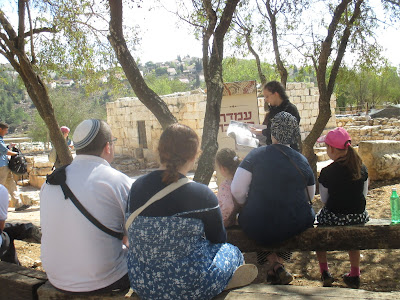 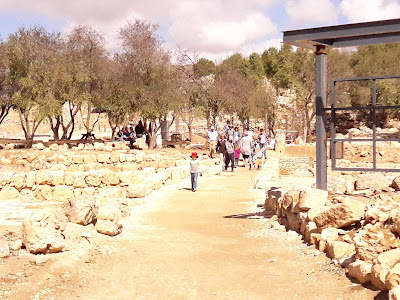 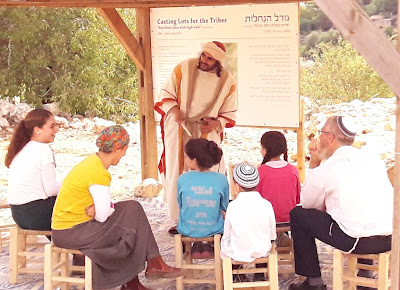 Yesterday I had a very enjoyable time at Shiloh Hakeduma, the archeological site at Tel Shiloh. As every Hol Hamoed, the "Intermediate Days of Succot and Passover," there were activities for all ages.

I made my way to the site which is believed to have been where the Mishkan, Tabernacle had been for almost four hundred years. There were a couple of musicians and a group of people. I quickly noticed that the people weren't Jewish. They were Christian, and some were even wearing large crosses. I sat on the side quietly observing the interaction between them and the young men playing the saxophone and electric organ.

Rather surprisingly, the group requested Jewish religious songs. They sang along with great enthusiasm. They kept asking for "Sh'ma Yisrael," a very iconic Jewish Prayer which states an important principle in Jewish theology, but the musicians insisted that they didn't know it as a "song." After singing a few other songs to the music played, the Christian group offered to sing "Sh'ma Yisrael" acapella, sans music.

The musicians and I were shocked to hear them singing the prayer exactly the way it's said in synagogue including the name of Gd and the second line, which is normally whispered. The translation is:

This is a total contradiction to Christian theology. And I couldn't remain quiet. I spoke:


"Do you know the actual meaning of this prayer?" I asked them.
"It means that there is only one Gd, one message, forever and ever."

Their leader tried to contradict me with the usual "prophet" quotations. I refused to get into a theological discussion. I wanted the group to understand the very basis of Judaism and to stress that we do not accept their premise that the person they worship was a god who brought a new/revised message. By translating from the original Hebrew and ignoring the timeline, Christianity distorts the Bible.

Judaism stresses the importance of the first five books over Prophets and Writings. And we learn the Bible in Hebrew. Every translation is a distortion, because no two languages are the same. Only simple numbers can be translated without an agenda.

I find this hijacking of this basic Jewish Prayer very disturbing, because Christianity's entire theological agenda is the exact opposite of the message of the Sh'ma. I wonder if anyone really listened to me.

Christians are very good at distorting the Tanakh. Sadly, many of them are sincere -- but are just sincerely wrong. They have no authentic Jewish teachers, only other misled Christians. I think it is our responsibility as Jews to teach them the truth. Not sure how this can be accomplished.

The answer is the 7 laws of Noah, which is Hashem's system for non-Jews as hinted in Tanakh and detailed in the Talmud, Rambam, and elsewhere. Reference Habad and/or Rabbi Uri Charky's World Noahide Center:
http://www.en.noahideworldcenter.org/

Zvi, the first recorded record of the 7 laws of Noah were recorded in the NT Book of Acts. It was created by the Netzarim (not Notzrim). The purpose was to bring none Jews to be able to commune with the Jewish community in order to share the Torah. Later on the rabbi's adopted the teaching to actually keep none Jews from joining the community in full Torah observance. The Netzarim did not believe in the existance of the invented extra Oral Torah. Three out of four of the main Jewish sects of that time period knew of no such "extra" Torah from Sinai. At anyrate, the Netzarim tried to share the Torah with the goyim, living a Torah observant life based on the written. Halachot was based upon solely the Tanach. Thats real history.

What to expect? Anyhow even more egregious is the Christian Churches' changing the order of the books of the Tanach, which of course becomes the Old Testament. The last book in the Old Testament of the Christian Bible (it ends with the Minor Prophets, all Christian denominations as far as I know) is thus Malachi, and his 'curse'. Even that has its own interpretations that differ in Jewish theology to the Christian one. That way the Church can say and has done so, that the Jews are cursed by their own hand, that's after all how the Old Testament ends in Christian bibles; and then Christianity came along and is blessed, by its own admission. And is 'the True Way'. As we all know, the Hebrew Bible ends with The Ketuvim, not Malachi, not even the Minor Prophets in other words (which to us is a single book, but the Christian Bible break up each of the prophets into 12 single books).

They have their agenda, and it's not in line with Judaism.They distorted the bible. Their religion is the exact opposite of the Sh'ma.

Batya, the NT "Jesus" is 180 degree opposite from the historical messianic movement from 2000 years ago. It was one of four movements, bacically Opposition Sadducees.. They based halacha solely on the Tanach. It was a very tough time in history and the victors rewrote history. Thats including both the Pharisees (rabbinical Judaism) and Roman Gentile Christianity.

The Sanhedrin had to institute clarity in Jewish Law, and that is recognized Judaism.

Recognised Judaism may not be the correct derech by any means. This is exactly the problem. It was taken off course, thus our continual problems and division. But we put tradition over historical accuracy and historical truth. Just because one political party (Pharisee/rabbi's) that sided with the Romans against the uprising which led to the destruction of the 2nd Temple proves that party led us into the galut and keeps us there. I don't need to repeat the sources. Until we correct this, we will be at continual war among us, the Nations and with the Arabs.

Did you happen to mention to the xtians that the 19 Benediction is actually about them? LOL. Be truthful in all matters.

Shilo only speaks of the Torah in a historical way with no kedusha. The Written and Oral Laws were already given together at Har Sinai!!! This is what the Jew needs only to believe and according to the Rambam's Thirteen priniples of Faith. Everything else is idolatry!

A, exactly. Shiloh, you're on the wrong track.

I do wonder whether this comment will be posted.
The Shema is the essence of Christian theology, and I lay out why in the link below.

Maimonides' Hellenic and neo-Platonic theology enjoins Divine solitariness, but it's plainly as antithetical to the Tenach as Plotinus, the source from which he derives it.

How can you use Hellenic and Platonic as adjectives to describe Maimonides? It hurts my eyes to see them clustered in the same sentence? In the same category? In the same reality?

charles, you make absolutely now sense at all.
lea, amen

Leah, and Batya Medad, please read the later chapters of Moreh Nebuchim again, and you'll see how much Maimonides, for all his greatness of intellect and heart, is indebted to Plotinus and his successors.

For example Rambam is given, not only to Divine Unity (which all monotheists advocate), but also to absolute Divine Simplicity - where's that found in Torah?

'There cannot be any belief in the unity of God except by admitting that He is one simple substance, without any composition or plurality of elements' 1.51

This is pure paganism from Plotinus in the Enneads. It's a foreign altar and one that befits no child of Abraham.

At time his advocacy of Simplicity leads him to the brink of denying the actuality of the Divine attributes which grates severely with their emphatic affirmation in the Bible.

He has a lot more in common with Islamic philosophers than with scripture - including for example his use of the word 'shirk' for polytheism. More in the link.

What language are you reading from? What did he write in? How many steps/translations away?

What language is charles writing in? No comprende...

There are is actually a group which does not believe in the trinity at all....just an FYI. They are called the Christadelphians and instead believe and teach that Jesus was a man not God.

What do they worship, and what role does Jesus play in their theology?