It's no longer rare to hear of a terror attack, almost always done by someone with an Arab sounding name, in Europe, the Americas and further afield. Years ago, I began warning that "understanding," excusing, rationalizing and legitimizing the Arab terrorism here in Israel would only whet their appetite and make terrorism spread all over the world.

Unfortunately I was right. The terror attacks have gotten larger, more frequent and in more and more places. Also the excuses have gotten more varied, creative and even less clear. It now seems more and more that the attraction of violence, the smell of the blood turns on some people, and they attack just for the "fun" of it. 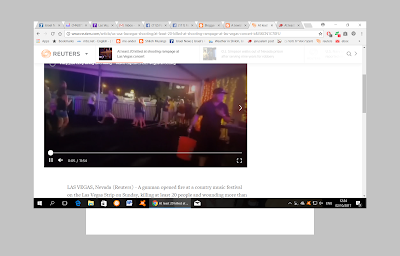 Just a couple of hours ago, terrorists shot up a concert at a casino in Las Vegas. There may be a couple of dozen dead and about a hundred injured. Each update is worse.

It's going to be very hard for the world, its leaders and media to reverse the process, a major and complex "undo." The key would be to admit that terrorism against Israelis, no matter on which side of the "greenline" is totally immoral and inexcusable. Let's see if that ever happens. And if it doesn't, international terrorism will only grow, get worse and more frequent.
Posted by Batya at October 02, 2017

Most people [including Jews] don’t know this,
but Las Vegas is probably the #3 USA city
for ex-Israeli Jews to live in,
behind NYC and Los Angeles.

Las Vegas is also one of the worst USA cities
to live in, measured by Quality of Life.

I had no idea. I thought that Florida was more popular.