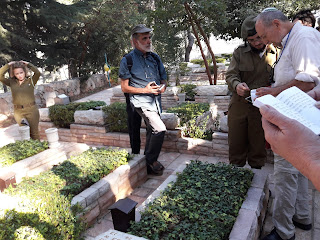 As we've been doing since the funerals forty-four years ago, my friends and I met yesterday afternoon at the Mt Herzl Military Cemetery. It's hard to believe that so many decades have passed since our friends from the Betar Zionist Youth Movement, North America, were killed during the 1973 Yom Kippur and its aftermath. Are we really so old? 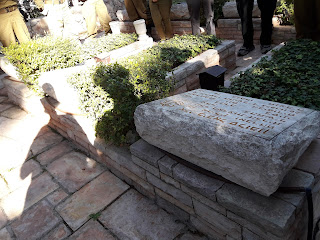 We walked around looking at the ages written on graves, horrified anew. The war may be old on the calendar, but it's fresh in our hearts.

The IDF Israel Defense Forces always assigns a number of young soldiers to attend the Memorials. As we've been doing for many years already, we talk to the soldiers about our friends. The soldiers are always amazed that we meet every single year, and that we are friends, not siblings, cousins etc. Our friendship is stronger than most blood families at this point. We have known each other for so long and been through so much together. Our celebrations and mourning have connected not only us, but our children, too.

This year we went to three graves. Two were of "lone soldiers," but in those days, there weren't any special benefits given to those who came to Israel on their own to serve in the IDF without any family. Friends played an irreplaceable part in the lives of those new immigrants, and the loss of such soldiers hurt friends even more. Also decades ago, when my husband and one of the friends who had been killed in 1973 served in the IDF basic training, the only difference that married men with children got in their service was to have the time reduced. We had no salary for the three months he served, just a small stipend, enough to cover the cost of a chocolate bar, or two, a week, plus soft drinks.

That didn't stop us from living here. We are still here, as are our children and grandchildren, ken yirbu, may there be many, many more Gd willing. 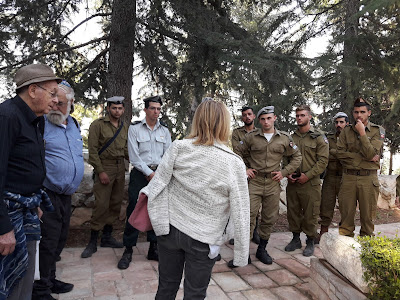