Could Nikki Haley be The First Female POTUS?

I don't know about you, but I've been very impressed by Nikki Haley, who is the American Ambassador to the United Nations. And to be honest, I'd be impressed by such qualifications and pro-Israel policies even if she wasn't a female.  When I check out the quality of a person in politics, I don't consider the sex of the politician. I look at policy, honesty and statements/actions when it comes to Israel. From what I've seen of Haley, I'd be very happy to have her as POTUS, President of the United States. What do you think? 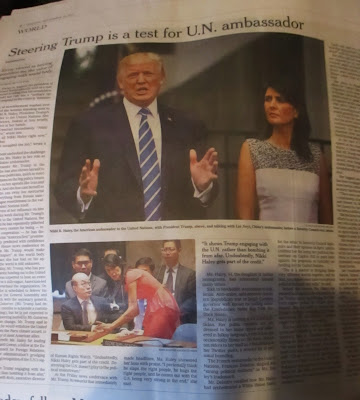 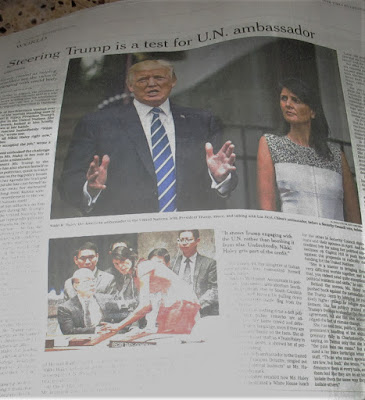 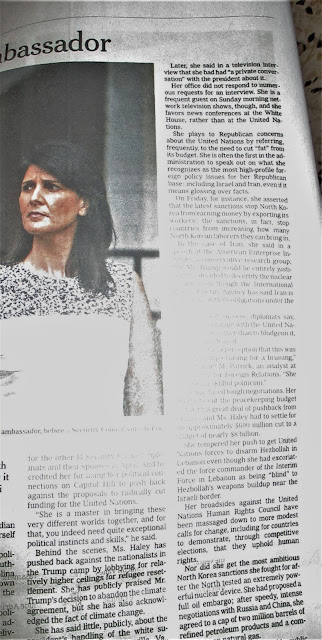 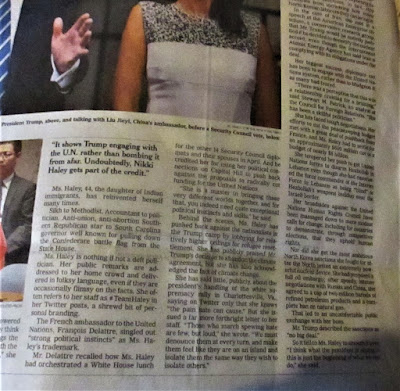 Ambassador Nikki R. Haley is the United States Permanent Representative to the United Nations and a member of President Donald Trump's Cabinet.

Prior to her service at the United Nations, Ambassador Haley served as Governor of South Carolina and chief executive of a state government with more than 67,000 employees and an annual budget of more than $26 billion.

Under Haley's leadership, South Carolina's economy flourished. Haley visited foreign countries including India, Sweden, France, Germany, and Japan on economic development missions to recruit jobs and investment for South Carolinans. She negotiated deals with some of the largest corporations in the world and convinced them to make South Carolina their home.

The state announced jobs in each of South Carolina's 46 counties - more than 85,000 jobs total - and South Carolina’s unemployment rate hit a 15 year record low during the Haley administration.

Haley was the first governor in America to sign legislation combatting the anti-Israel Boycott, Divest and Sanction, or "BDS", movement. Haley also fought back against efforts to bring terrorists detained at Guantanamo Bay Naval Base to the United States. In 2015, Haley led South Carolina through one of its most difficult periods, forging unity and consensus in the wake of tragedy at Charleston’s Emanuel A.M.E. Church, the removal of the Confederate flag from the Statehouse grounds, and the record breaking 1,000-year flood that devastated the state.

Born in Bamberg, South Carolina, the daughter of Indian immigrants, Haley’s first job was keeping the books for her family’s clothing store —at the age of 13. She is a proud graduate of Clemson University.

Haley and her husband, Michael, a Captain in the Army National Guard and combat veteran who was deployed to Afghanistan’s Helmand Province, have two children, Rena, 19, and Nalin, 15.

U.S. Mission to the United Nations

I couldn't agree with you more.

Her very forthright manner of presenting her case at the UN has really impressed me. Having you raise the issue Batya has caused me to do a background check on Nikki Haley.

Thanks
I think she's the best possible candidate compared to either part, and the female thing is minor. I want a good person first; HIllary wasn't one for sure.

Marco Rubio and/or Ted Cruz might make
another attempt to become USA President.
If my memory is correct, both
of them are very pro-Israel.

If my memory is correct, Mike Pence
(the current USA Vice President)
is also very pro-Israel.

So Nikki Haley is not the only option
for pro-Israel voters in the USA.

Also, we must wait THREE YEARS until
the next USA election, so this type
of speculation is certainly premature.

She spews lies just like the rest of them. NO different. Another neocon dog of war.

Primaries will be starting soiber than you think.