Still Trying to Change the World

Yesterday I found myself having a bit of an argument with an elderly, obviously older than me, man on the lightrail. We were among the half-dozen or so senior citizens trying to "stare" a couple of very young men into getting up so the two eldest of us could sit down.

Usually I'm pretty good at it, but even though not only were we all staring daggers at the kids and complaining sufficiently loudly, neither of them got the hint. The very elderly man was rather jaded by the bad behavior and announced that he'd be getting off at the next stop hoping that he'd get a seat on the "next train."

Somebody said that we should be a bit more aggressive and just tell the kids to get up.

I was very upset by this little arguement. It was still bothering me when later on I got on a crowded bus. Three young men occupied four seats in a way that made it impossible to sit down. And again there were a number of much older people who needed seats. I didn't have the patience to wait very long. I could see that they had glanced at us, although they didn't get up. So I took the initiative:

They looked up, saw that we were all old enough to be their parents or grandparents, so gave us the seats. I admit that I wasn't all that polite. Most of the time I have absolutely no problem just sitting down, but one of them had taken over two seats in a way that made it impossible.

A large percentage of  passengers on public transportation here in Israel are senior citizens. Many times when I get on a crowded bus or train, I see that those seated are my age or older. Then I am just very thankful that I can hold on and stand. At my age, you can't take such a thing for granted. I sometimes ask a young person who's sitting to get up for someone who needs a seat. We shouldn't be shy about it.

I hope that old man got a seat on the next rain. 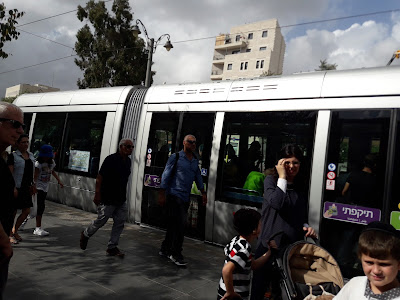 *Derech Eretz are the Jewish Laws pertaining to how to treat others including the elderly.
Posted by Batya at October 09, 2017

Laws dont work! Only a connection to God and the circumcision of ones heart. The system here does not work.

Nothing Jewish in "circumcision of ones heart." And I did teach them something.

The second group got up, and then when I told them they were blocking a woman who needed to sit, they moved. I've done this before. I'm a remedial teacher and not afraid of opening my mouth.

This is so sad. We've raised a 'gimme' generation with no thoughtfulness for others. In Netivot I used to take a cab to the first bus stop for the bus to Jerusalem to be assured of a seat! (B'H I now have a car that I leave near the stop.) Good for you for speaking up but distressing that you needed to. **sigh**.

Thinking bad thoughts about them is worse. But I'm really glad I spoke up, because other people needed to sit. If it was just me, I'd stick with the "looks."

Deut 10:16 Circumcise therefore the foreskin of your heart, and be no more stiff necked.

Jer 4:4 Circumcise yourselves to the LORD And remove the foreskins of your heart, Men of Judah and inhabitants of Jerusalem, Or else My wrath will go forth like fire And burn with none to quench it, Because of the evil of your deeds

This is a metaphor obviously that is not taught. But it is Jewish coming from the Jewish Bible!!

Sadly the arrogance of the younger generation is a huge problem, though the sages do address this specific topic in the time of the mashiach. The chutzpah of people in this country is beyond belief. But that's another story.

Why not simply say: "Excuse me. It's a bit difficult for me to stand. May I please have your seat?"

I'll bet 99% of the elderly making such a request will have a seat immediately.

Martin, I generally try to get seats for others, not just me. I don't like to make it personal, since sometimes I have others sit while standing if they need it more.

It is a positive commandment to stand
before an elderly person or Torah scholar,
as it is written:
“BEFORE THE ELDERLY YOU WILL STAND…”
(Vayikra, chapter 18, verse 32)

Mr. Cohen, I'm waiting for them to teach proactive derech eretz in all of the yeshivot, all colors and styles, which would include practice.

I like the buses in Yerushalayim with the signs saying "Mipnei seiva takum" (and sometimes also as a recorded announcement).

Maoz, exactly. That's why I feel that I'm obligated to remind people who obviously missed it.