Nadia Matar and Yehudit Katzover, of Women in Green set up a protest vigil, thirty-three 33 hours, one for each of the recent victims of Arab terror.


Activists for applying Israeli sovereignty to Judea and Samaria began a 33-hour vigil outside Prime Minister Benjamin Netanyahu's Jerusalem residence Sunday to protest the 33 murders since the wave of Arab violence began on the eve of Rosh Hashana. (Jerusalem Post)

Women in Green co-director Nadia Matar told Arutz Sheva that the primary purpose of the vigil was to shake the Israeli public awake and prevent people from simply "getting used to" daily anti-Semitic attacks in the Jewish homeland.
"This cannot go on, we cannot get used to it!" Matar said. "We're not in (pre-war) Poland - we are in Israel, in sovereign Israel, in 2016!" (Arutz 7)

Gd willing there will be no reason to extend the vigil. May there be no more innocent Jewish victims of Arab terror!!

It has been awhile since I've made it to one of their protests, but I was greeted with warm hugs and a request to speak. Matar and Katzover planned this protest as a "Hyde Park" style protest vigil offering various people the opportunity to voice their opinions. And since they both think of me as "Batya Shiloh," because of Women's Rosh Chodesh Prayers, and the obvious fact that I live in Shiloh, I did mention in the few minutes I spoke, in both Hebrew and English, that next Rosh Chodesh Prayers will be Friday, the first of Adar Bet, March 11, Gd willing.

I felt very privileged to be included among the much more important speakers who gave extremely informative and fascinating speeches, professors,  an architect and the new young Director of Moetzet YESHA Shiloh Adler, among others.

I've always found it inexplicable that the State of Israel reacted so negatively to the miraculous victory in June, 1967. Instead of immediately declaring sovereignty and encouraging Jewish settlement over all of the Land we miraculously liberated from illegal Arab occupation, the Leftist Labor rulers treated our precious Land as if it was leprous. And we are still paying the painful deadly price for their mistakes!

Here are some photos from the vigil. 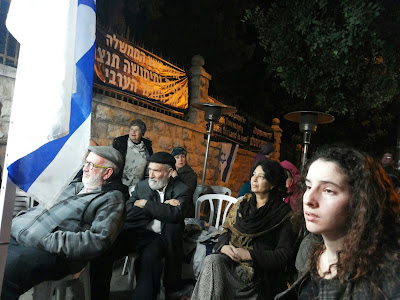 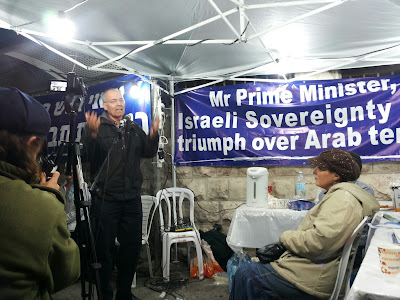 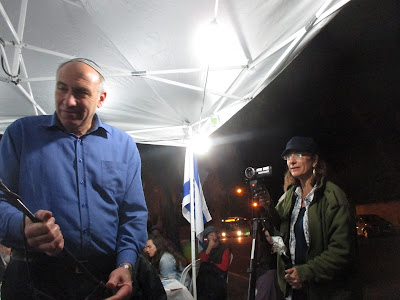 "I've always found it inexplicable that the State of Israel reacted so negatively to the miraculous victory in June, 1967. Instead of immediately declaring sovereignty and encouraging Jewish settlement over all of the Land we miraculously liberated from illegal Arab occupation, the Leftist Labor rulers treated our precious Land as if it was leprous. And we are still paying the painful deadly price for their mistakes!"

Batya,
I don't know why you found it inexplicable. It was not a "mistake" but a grievous sin.

God gives victory over Israel's enemies and Israel in return rewards them always...
even to this day with another Netanyahu, Kahalon 'evil' money transfer to the Philistines for their killing of Jews.

There is nothing new under the sun.


Then Caleb quieted the people before Moses and said,
“We should by all means go up and take possession of it, for we will surely overcome it.”

31 But the men who had gone up with him said, “We are not able to go up against the people, for they are too strong for us.”
32 So they gave out to the sons of Israel a bad report of the land which they had spied out, saying, “The land through which we have gone, in spying it out, is a land that devours its inhabitants; and all the people whom we saw in it are men of great size.
33 There also we saw the Nephilim (the sons of Anak are part of the Nephilim); and we became like grasshoppers in our own sight, and so we were in their sight.”

The reality is that am yisrael is ruled by grasshoppers and the people love it so.

I think its easy to see why people ignore the miraculous victory in 67 (I would say many more, but at any rate), miraculous=God. For both for and against, that would then by default relate rabbinical Judaism's interpretation as being the "Path". God is there waiting for us, but it will fail if we choose the incorrect "Path".

Again, we see Shiloh denying the Oral Law that was given at Sinai.

Marcel, in this case, is correct.