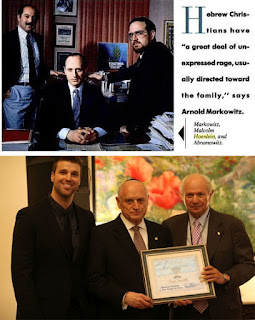 That's the same evangelist Mike Evans whose messianic activities targeting Jewish students in the 1970's caused Hoenlein, then the executive director of the Jewish Community Relations Council (JCRC) of New York, to mobilize the Jewish community and form an emergency counter-missionary task force.

Balint's interview draws upon extensive research from JewishIsrael. She has also previously written an investigative piece on Evans which appeared in the Times of Israel.

My thoughts left for Judy at algemiener.
I hope they post it ?

Interesting article Judy,
The waters are so easily muddied in these days of confusion and great instability.

The one danger and greatest threat to the Jews continue to be swept under the rug.

While the purist Jews go after 'missionaries' they have willingly converted to the shameful will and agenda of their big and all powerful god, Washington, whom they've served and obeyed with religious devotion for decades.
Bowed down on their knees, willing and obedient slave's as we witnessed at Gush Katif, all to please the Master they serve above God.
I'm speaking about Israel and their leaders devotion to Temple Washington and it's perverse miss ionizing 2 state final solution for Israel.
Even after the failed and shameful surrender and retreat episode from Gush Katif and doing great damage to am Yisrael.
And again, and again, abusing fellow Jews at Amona and Migron in order to please the false god of the Potomac which Israel continues to serve with religious devotion it is much easier and acceptable to write about some minor nobody like Evans who is only trying to make many buck$, just like Trump.

Is it any wonder why Jews have to look behind them when they walk the streets of Israel, not looking for the terrible missionaries, but the peace partner they surrender land to in order to please their Masters at Temple Washington.

PS; I've got nothing to do with Mike Evans, to me, he's just another 'evangeli$t' getting rich with his gimmicks and hype to raise MONEY,MONEY, MONEY!

Marcel is right. Hoenlein is just one of those too involved with the outside powers (wearing his kippa) and that's a tricky business for a 'religious' Jew. Eventually, they have to take sides and that's where their real test of emunah comes in. The State has been infiltrated to such a degree with tumah, believe, only H' will be able to save us from ourselves, through our righteous Moshiach.

Marcel,
If you think long and hard about this, then you will see that the problem you wrote about and what JewishIsrael wrote about is basically one and the same.

I understand that those in Israel who fear the LORD are still under the thumb of the grasshoppers who rule Israel, just as the righteous in America are under the thumb of evil globalists with their second attempt to build their final Tower of Babel .

Our deliverance will only come from the LORD.
We are powerless without His intervention.

No SERIOUS demand from the righteous, observant Jews of Israel for leadership to end the two state solution and stop ALWAYS capitulating to Washington, Always.
Here in the US delusional Christians think their deliverance will come from their latest idol, D. Trump.

If you think about it, how many continued to stand with, support and vote for the chameleon Netanyahu after he CAPITULATED TO THE AGENDA AND THE WILL of the Washington missionaries ?

How easily Israeli leaders always wet in their pants and backtrack what they said when the Washington missionaries put just a little pressure on the grasshoppers.

How the weak, timid grasshoppers could not even get Jonathan Pollard released from the claws of supposed ally and friend Washington missionaries of Sheol which Israel continues to serve and obey (under 4 presidents of both parties).

The good thing is that God is in charge and His agenda with and for Israel will triumph.
He gets all the credit, all of it.
shalom,
Marcel

Marcel,
There's something about the way you write. Let me guess... You're the kind of guy who rejects the worship of Trump on "Temple Washington", but you look forward to the worship of your lord jesus on the Temple Mount. Am I right? And if you choose to answer, try being direct and drop the weird prose.