The Rise of the Dark Horses, Trump and Sanders, American Presidential Hopefuls

As a longtime observer of political machinations, I'd say that this latest upcoming American Presidential Elections is among the most entertaining so far. Two of the most unlikely candidates/hopefuls, one from each end of the political spectrum are doing better than anyone could ever have expected.

Maybe I should call this piece "Against All Odds." Who would have thought that Donald Trump would be trumping the Republican establishment? 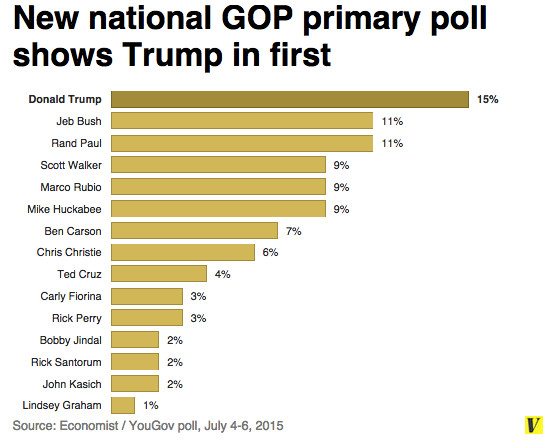 With all the bad press he gets for saying what people think, but professional politicians wouldn't dare mouth, he is attracting support. At this stage of the campaign with just under a year and a half before actual elections, there are two things this signifies, when looking at the poll chart above. One is that there are an awful lot of hopefuls, and the other is that none seem to be very popular. Trump polled 15%, and another five between 9-11%, which shows a very divided Republican public.

Unlike Jeb Bush, who for most is just another Bush, Trump has a strong, though eccentric "brand name," known, not only in all areas of the United States, but all over the world. Many people are attracted to Trump because of his massive financial success, of which he reminds people 24/7 by naming his buildings, hotels, developments etc after himself. "Modest" and Donald Trump just don't go together.

Donald Trump is the unabashed Right of the Republicans.

His nemesis is Bernie Sanders who is from the radical Left of the Democrats. It is said that he has moved to a more moderate stand over the decades. When Sanders first announced his candidacy, many people reacted with "Who?" And even now, when he's coming up second to Hillary Clinton, people aren't quite sure where he stands on some issues. And just in case you're curious. I wouldn't support or vote for him just because he's Jewish. His stance on the Left of the political spectrum does not mean that his policies vis a vis Israel would be good IMHO. Actually, most of the American Left, including Jews, harbor opinions dangerous to the security and continued existance of the State of Israel.

It seems that after over six years of Barack Hussein Obama as POTUS, the American people want someone as different as different can be. And I'd say that both Trump and Sanders fit that bill. That doesn't mean that they have a chance to get their party's nomination. But they are certainly adding some needed spice and fun to the campaign season.

This is just the "starter" of the American Presidential Elections; there will be lots of news and changes and surprises by the time it is over in November, 2016. Hold onto your hat; I expect a very bumpy ride for the USA.
Posted by Batya at July 10, 2015

Maybe this is a good sign because maybe now before Moshiach's arrival, the TRUTHS are starting to emerge in this world of near-total sheker. Here we hear some Truths coming out from a potential candidate.