I feel like I was just hit by a heavy truck.

Call me dumb. Call me naive.

Well, I should tell you what got me floored. I read the recent notice to American Citizens from the U. S. Embassy. It said that many American citizens in Gaza want to leave and are asking for help from the American Government. And to receive help, they must register with all sorts of documents. Among those documents is a "Palestinian passport number and validity."

It shouldn't be confused with this old one, from the British Mandate. 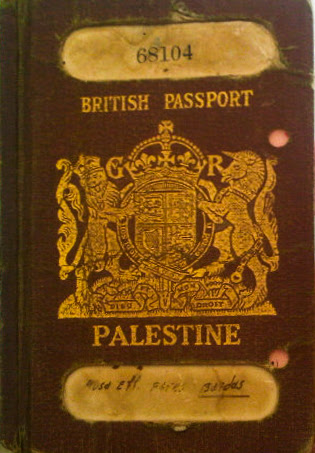 During the British Mandate, the term "Palestinian" referred to Jews, not Arabs.

That should give you something to think about...

Its been long known. Even Leiberman says to kiss the Greater Israel dream goodbye. Even if God Himself sent the answer Batya, we would make his life hell and ignore him. Take that to the bank. We are to blame, no one else.

Shiloh, oy, I do blame ourselves. We made Arafat accepted, and we built up the Arabs promising a state. We gave Har Habayit to the Muslims and Jordan. We have a long way to go.

I pray that G-d won't exile us again.

Exile is the kind way, I suspect we are long past that. If we are in the prophetic end game, it will be a nightmare. Our stupidity, our behaviour towards each other, such disregard for others, ignoring God after He identified His chosen (in our day), why should He not send a wrath, give me a good reason as we disgrace Him daily.

Palestinian passports have existed for many years. In 1974, King Hussein agreed (those subsidies remember) that he would no longer claim rule over the West Bank of the Jordan and Palestinians would have to decide what citizenship they wanted.

The Ramallah government has control over Palestinian passports. Hamas wanted it, but was not able to get it.

Palestinian passports were initially recognized by other Arab governments - and they are by various other governments by now.

If they didn't have Palestinian citizenship, many would be stateless. On the West Bank many used to be Jordanian citizens, but are so no longer.

Sammy thanks for the info

Palestinian passports have been issued since 1995 (but I think Arab state recognition of Palestinian citizenship goes back much further. It was definitely the case in 1991.)