For Calm on Har HaBayit, the Temple Mount

There is only one way for there to be calm and peace on, Har HaBayit, the Temple Mount Judaism's holiest site. 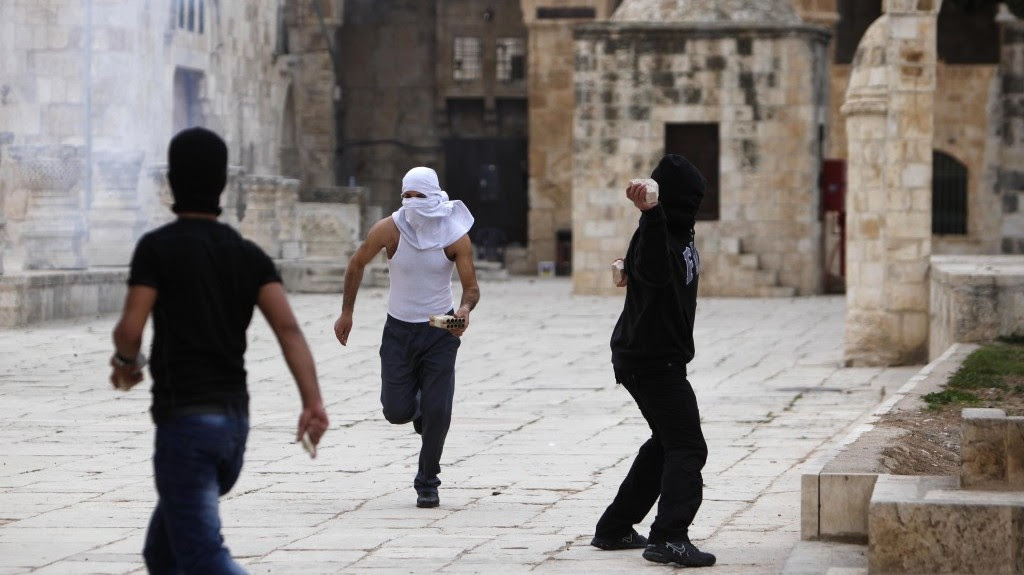 At present there is a totally unacceptable and dangerous situation where Arab terrorists are attacking Jews and Israeli security forces. While Jews and tourists must undergo security checks and behave in peaceful non-aggressive ways when only the Temple Mount, the Arab Muslim terrorists enter freely, no inspections, and are allowed to harass Jews at will. This frequently escalates to attacks on the security forces there. Only the Arabs are allowed in without any inspections at all, even if they have bags with them which could be full of weapons and bombs.

At present, the Arab Muslims can bring whatever they want, even weapons, but Jews can't bring even prayer books. The Arabs are permitted to curse us, and we aren't even allowed to pray silently  to G-d.

This is an outrageous situation. The result has been frequent violence on the Temple Mount between the Arabs and the Israeli security.


The solution by the Israeli Government makes no  sense. The Government wants to limit Jewish rights on the Temple Mount even more. Political leaders, that is Jewish politicians are being banned from there.

Our very own defense minister is blaming the victims and ignoring the source of the trouble, Arab, Muslim intolerance and violence. This is totally impossible to comprehend, and our government's further restrictions on Jews is just encouraging the violence.


Jews, Muslims, Christians and anyone else all must undergo the same, exact level of security checks and clearance to ascend it to visit, pray or just tour around. Prior to that, it must be thoroughly inspected and cleared of all weaponry. Yes, that means that for a period of time nobody will be able to ascend.
First the Temple Mount including the mosques there must be totally inspected and cleared of weapons. After that everyone who wants to enter the Temple Mount must be inspected with equal vigilance. And instead of sending police along with just the Jewish visitors to prevent prayer, there must be Arab understanding Israeli police with the Muslims to stop all violent speech and arrest any who call for attacks on Jews.

Only that will bring true peace!

Shavua Tov! Have a safe and wonderful and blessed week!!
Posted by Batya at November 09, 2014

I hear you, Batya. The other thing that runs through my mind is that it is heating up. I do not want to see my brothers and sisters get hurt or worse, cv's. It appears that it is heating up though and I can and do direst my prayers that if it is heatingup please please please Hashem, Ha Kodesh Baruch Hu please allow that THIS fight for The Temple Mount lead to the Bais HaMikdash HaShlishi THIS year!!!!
Let no blood be spilled in vain. Let all those Jews sitting in your picture there waiting to enter be a sign that we really want to be able to enter The Temple and offer sacrifices that are G-d commanded and not resultant of heinous twisted ideology such as what the stone throwers (and worse)want.
Be well and may we see the final final final ultimate yeshuah this year!!!!

I agree that there must be equality. There are only two problems with equal use of the Temple Mount: the Arabs and the Jews. There should simply be a declaration of sovereignty by the Government followed by removal of all human presence on the mount, achieved by a battery of lasers around the perimeter. Anything that moves will automatically get zapped. It will be controlled by computer, not by human agency. Police will stand around bored and talk on their cellphones on the outside. There will be warning signs in enough major languages and an audio warning for people who are illiterate or don't believe in reading signs. Anyone who proceeds further gets burnt to a crisp.

Janet, Yehoshua's wife here: I want to add to what my honored husband has said. The security forces stationed arount the perimeter of the Temple Mount should not be allowed to be bored and talk on their cellphones. An important part of their job will be to protect the innocent (but maybe stupid) people who can't or don't read the signs. Being illiterate should not be punishable by death! They also will watch out that the Arabs don't use those lasers as yet another method of killing Jews or their other enemies by pushing them into the laser beam.
The closing of the Temple Mount to EVERYONE will continue till such time as Israel is ready, willing and able to truly exert sovereignty. The announcement/explanation of this policy should be polite but firm and without apology. It can be treated as a simple safety issue, similar to the way the Statue of Liberty in NY was closed for over a decade while renovations were planned and carried out. Tourists were disappointed; but nobody refrained from visiting NY because the famous Statue was closed. Everyone understands that when a place is dangerous, responsible policy requires it to be closed until the danger can be resolved.
I admit that this is not the ideal situation. I would certainly prefer to see Messiah come and build the Temple there, and lead us all to Peace and Goodness. Seeing the State of Israel exercise some backbone and establish Israeli rule in all Judea & Samaria, starting with all of Jerusalem (including the Temple Mount) would be a good second choice. However, since that doesn't appear to be happening soon, and there are riots on the site now, this modest proposal seems like a good compromise in the meantime.
This temporary measure is, as I mentioned above, not ideal, but it solves several problems: 1) it helps the security forces quell the riots 2) it shows the Arabs that, while we are not strong enough to REALLY take control, (they know that already) we ARE strong enough to force them to stop using this holy place as a War Room (we need to prove that to Arabs and ourselves!) 3) it stops them from further destroying the site, and desecrating it with their donkeys etc. 4) Jewish police will not need to go up to the mount in a forbidden manner
Blessing to all who seek the rebuilding of the Temple in Jerusalem; to all who seek her peace and well-being!

Leah, Janet, Goyish, thanks for your excellent comments.
I am not lover of lasers, prefer people. I sincerely believe that proposals like mine, one based on Jewish sovereignty is the best way to not only bring the Moshiach, but recognize him and begin the building of the Bayit Shlishi.