Why The Terribly Low Turnout in Israeli Municipal Elections?

Jerusalem Mayor Nir Barkat was just reelected with the support of about 20% of the eligible voters.  Now that does seem pretty pathetic. You may be curious how I got this number.  Simple Math:


Twenty percent doesn't show much support.  Does it?  And now Barkat has to fashion a coalition out of a very fractured city council.

Other mayors are in worse shape.  The Tel Aviv voter turnout was even lower Jerusalem's. Huldai got 51% out of the 31% who voted.

Most other cities, except for charedi and Arab showed similar statistics.  Why don't Israelis show up to vote?  In Israel's two most important cities, the capital and the city foreigners, with total chutzpah, designate as "capital," less than half the potential voters voted.  That's frightening.

I find it very worrying that most Israelis don't see any value in making an effort to get to the polls.  They were open until 10 pm, which is late enough.  It's night like Israelis sit home most nights doing nothing, watching TV or playing on the computer.  I'm always amazed at the amount of Israelis out shopping and enjoying themselves until late at night, even schlepping along their kids.  So if they can shop at 9 pm at night, why can't they vote?

It's a matter of priorities and of faith, the belief that their vote would really make a difference.  Israelis love all these reality TV shows in which the viewers can vote. Many do that with great enthusiasm.

When it comes to politics and government, that enthusiasm and innocence are long gone.   When I was growing up and when my older children were young, there were many volunteers helping politicians to get elected.  Then suddenly, somehow, more money came into the election budgets to the political parties and kids got paid for what once was a labor of love, making sure the best candidate won.  Helping candidates became a job.  The enthusiasm, passion and honesty went down the drain.  The kids who learned to recite the script they were assigned learned a terrible lesson.  Politics is just an act.  You can't trust what the politicians say when they the official supporters just parrot what they were taught.

And it certainly doesn't help when for the past few decades we've all seen elected officials promoting policies diametrically opposed to the platform they spouted to get our votes. 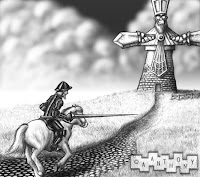 Sadly I must admit that I understand them.  I can relate to their cynicism. I think it's very dangerous for the future.  But I'm still a '60's idealist and like Don Quixote, I haven't given up going after those windmills.  I hope to change things while I'm still breathing and blogging.

I support doing away with elected PAID representatives in favor of giving every citizen an electronic vote on every legislation. Abolish the Knesset, the city or regional council and let us all have our say in the virtual environment. Fierce debate over the internet followed by vote with heavy duty data security.

goyish, of course voter turnout will be higher due to all the cheating. And how will those, and there always will be some, who don't have electrical devices vote?