"Peace Agreement" versus Israeli Security- It's Not About Settlements

Way back when, pre-Disengagement I disagreed with what most everyone was saying about the dangers.  I even made a speech at an anti-Disengagement demonstration in Manhattan. My basic premise was that it wasn't about "displacing" a few thousand wonderful Jewish families.  The dangers were to the very security of the country and establishing a precedent that could G-d forbid be used in Judea and Samaria.  Unfortunately, I was 100% on target, unlike all of the official protest movements and the YESHA Council.

Now again, I find it important to stress that giving Arabs sovereignty over Judea and Samaria, whether the entire area or just sections endangers the entire State of Israel.  Quite a number of years ago, I was in a tremp with a neighbor, Yossi Apter, who then also picked up a soldier.  In those days soldiers were permitted to tremp.  Yossi asked him what he was doing here, and he said:


"I'm guarding the yishuvim, settlements."
"No you're not" said Yossi.  "You're protecting Tel Aviv.  If Israel doesn't hold onto Judea and Samaria, then Tel Aviv is in danger."


Take a look at the map. 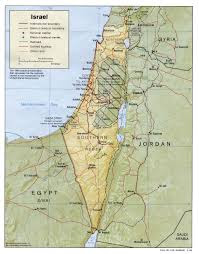 Israel is a very tiny country.  Besides the very simple basic fact that NO OTHER COUNTRY HAS EVER GIVEN AWAY LAND LIBERATED IN A DEFENSIVE WAR TO AN ENEMY THAT HAS SWORN TO DESTROY IT, it's clear that without Judea and Samaria most of the State of Israel is totally vulnerable to attack.

There is no logical nor historic nor moral reason for Israel to give the Arabs anything at all.


Nearly five years ago, Prime Minister Binyamin Netanyahu accepted the Palestinian demand of a state with security conditions. Israel has also agreed to release more than 100 additional incarcerated Palestinian terrorists in stages.
Israeli housing starts are frozen in Jerusalem and Judea and Samaria and, according to Palestinian officials, Abbas has received a side letter or an oral guarantee at a minimum from the United States assuring the Palestinians that the disputed pre-war, June 4, 1967, lines would be the baseline for final-status negotiations, as reported by the Associated Press on July 21.
Virtually every Israeli government since 1967 has determined the pre-war 1967 line to be indefensible, while former Oslo negotiators such as former ambassador and legal adviser to the Foreign Ministry Alan Baker have noted that the 1967 lines constitute a legal fiction and that “no such borders ever existed.” (Dan Diker, Jerusalem Post)

The "green line" has no real legality.  It was a ceasefire line that existed barely eighteen years and didn't protect Israel at all.  Israel was attacked during that time on all fronts, from Jordan, Syria and Egypt.  In May, 1967, Syria, Egypt and Jordan began threatening Israel, demanded that United Nations Peacekeeping forces leave their posts and prepared for war.  Thank G-d, at that time, Israel had no foreign allies, just the Jewish People.  We prayed, and the Israeli Government sent the IDF into action to defend the country.  That's how we liberated the Golan, Judea, Samaria, Jordan Valley, Gaza and the Sinai.

We can't easily cancel the withdrawals from the Sinai and Gaza, but we must immediately cease the begging for peace and the offering of more Land!  If we don't, then the State of Israel can't survive.  LOOK AT THE MAP!
Posted by Batya at July 31, 2013

Okay we hear you loud and clear and desperately agree. But there is this sick aching feeling in my gut that we the little people are helpless - we have zero say in anything.
This creep ( I can't even say his name anymore) went directly against the publics wishes and released 104 murderers. Even the biased media thought he was nuts.
So what are we supposed to do? Foment a revolution - seize the reigns of power? We are Jews for crying out loud - not those monsters surrounding us on all sides.
I feel helpless frustrated and infuriated.
I walked into a major grocery chain store I shop at yesterday and the Arabs working there behind the meat counter were almost jubilant. It was so out of character they are usually angry sullen and unhelpful. They were joking laughing and it seemed snide and twisted.
I couldn't help the rage rising at the thought of this fifth column in our midst - until it struck me that there us a far greater enemy, our own brothers. I sat in the car and cried all the way home.
How do we become united as am yisroel and have ahavat chinam in the face of all this?

The Global freeze is palpable.

Whistlblower {for He whistles} Brother MANning faces over 100 years of incarceration for exposing American War Crimes.

The only place on earth willing to provide sanctuary for another Whistleblower Edward Joseph Snowden ~ who likewise exposed American War Crimes ~ is Russia, and that ain't saying much, pun intended, apparently.

He is not done exposing the Nations.

What should be sobering is the fact that Israel, as well as "Yesha" must not capitulate to White Nations. Plain and simple. That is this generation's last stand, unfortunately.

The test for Beis David, whomever they truly are, is forthcoming.

The fact that Israel kowtows to Beis Lavan is aPAULing, besides insulting.

shimona from the palace said...

I agree with you a billion percent. And I feel, so often, just like Sara. It's so frustrating! We have, once again, elected a government which does not only IGNORE its own promises, but acts in DIRECT OPPOSITION to them. But, as Sara says, what is one to do? Rebellion is unthinkable. Civil war, Jew against Jew, is a much more frightening prospect than any danger we could face by giving up land. It seems we are caught בין הפטיש לסדן.

shimona from the palace said...

On a lighter note - Sara might be wrong about the reason for the Arab supermarket workers' jubilation. It is their festival month of Ramadan, after all - that might have been all there was to it.

Actually shimona, I thought about that... But two things struck me... The female Arabs who work the cheese counter were not behaving the same. They seemed pensive and tense like waiting for the other shoe to drop. One actually seemed surprised I thanked her politely for filling the order.
No this was something different. It had an arrogant supercilious quality to it. Like they were mocking us - I try not to let paranoia overcome however, it was hard to miss...... My point is they weren't rejoicing in a relieved fashion like after Yom Kippur ( le havdil) it was something darker and twisted, and they didn't bother to hide it.
I just want to say one thing further. All the blogs say the same thing, its outrageous, it's wrong, ect ect ect. But no one talks about what we can constructively do to change the status quo in a yirat shmayim manner.

Moshe how does that help? Not on an individual basis certainly - we need an iron will as a collective whole. But then how do we get the government to obey the will of the people without making a chillul Hashem?

Who voted for Netanyahu? Who keeps Shimon Peres in Israeli government? How does this happen over and over again?

Interesting comments, guys, thanks. I don't think I can do better than you're already doing.

Batya-
how do I reach you by email?

We spell it Spiegelman