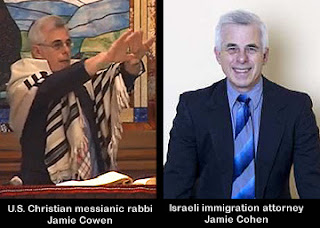 The firm is the latest of a growing number of legal organizations meeting the demands of evangelizing Christians who are looking to establish a foothold in the Jewish state.

JewishIsrael contacted professionals working in the counter-missionary field who are familiar with Jamie Cowen and his activities. We received a concerned and immediate response.

On the eve of Tisha b'Av 5773, Cowen's messianic deception and ability to breach Israel's gates as a "friend and lover" should jar the Jewish soul...more

In the second part of this report, JewishIsrael will take an in-depth look at the Law of Return, the evangelical lawyers taking advantage of the law’s soft underbelly and the Jewish activists who are encouraging growing messianic Christian claims to the land of Israel. 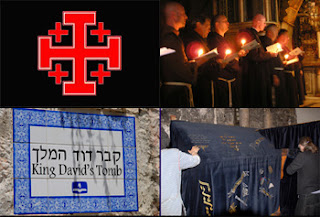 In an official press release, the Franciscan Custody of the Holy Land has announced that it has gained administrative control of the Cenacle shrine (Upper Room) on Mt. Zion, which is located above the traditional Tomb of King David, and will be opening up the site for Catholic worship.

JewishIsrael has been consistently issuing alerts and reports on the possibility of such a disturbing development...more

We suggest our readership watch these excerpts from the Franciscan -produced video which accompanied the press release.


"The adversary hath spread out his hand upon all her treasures; for she hath seen that the heathen are entered into her sanctuary, concerning whom Thou didst command that they should not enter into Thy congregation." (Eicha 1:10)
Posted by Ellen at July 15, 2013

Ellen, thank you so much for posting this very timely message on the Eve of Tisha B'Av.

"While the V gains 'control' of the site, Israel retains official 'ownership', which is something the spokesperson for the Foundation for the Holy Land finds 'disappointing'.