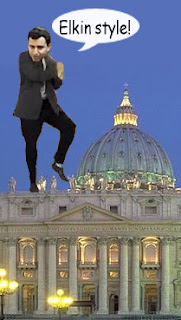 Arutz 7 has reported that Deputy Foreign Minister Zeev Elkin knows of no such deal involving the transfer of King David's Tomb on Mount Zion to the Vatican, as was recently reported in the Orthodox/Hareidi paper Hamodia.

However additional clarification is needed because official Vatican sources, as well as the mainstream press, are claiming that the Vatican will receive "administrative control" (rather than ownership) of the Cenacle (Last Supper Room), opening it up for Catholic church services directly above King David's Tomb.

Who is telling the truth and why such "undiplomatic" pressure from the Vatican over nonnegotiable property? JewishIsrael wants some answers, so we asked some hard questions …more
Posted by Ellen at July 18, 2013

Ellen, thanks so much for posting this. I find it very sad that Elkin thinks he's so powerful that it can't exist if he isn't on the "in."

It's true that Elkin came into the Foreign Ministry after the "deal" (whatever it is) was done, so to speak, by Daniel Ayalon and those who preceded him. This thing has taken years and years of negotiations, so it's likely that Elkin does not have a full grasp of what's going down here. But final details are apparently still in the works, so I think the public may still have an opening to demand answers from the government, and protest if necessary.