Israeli Democracy, Where are You?

Even the mainstream media here in Israel is horrified by Bibi's capitulation to American demands.  The United States, instead of trying to make peace where there is war such as Egypt, Syria and other real hot spots is using its clout on peaceful Israel.

For some totally incomprehensible reason, Israeli Prime Minister Binyamin Netanyahu has gone against all of his sworn principles and elections platforms kowtowing to terrorist demands.  THIS IS NOT THE GOVERNMENT THE ISRAELI PUBLIC ELECTED!!  Jameel at the Mukata certainly got it right. 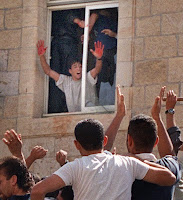 If you think that a pre-condition for peace talk negotiations should be to release savage murderers from jail, then raise your hands!

If you think Israel should make a mockery of it's judicial system, and spit in the faces of the broken Israeli families whose children and parents were slaughtered by Palestinian terrorists, raise your hands!

If you think that Prime Minister Netanyahu should ignore popular sentiment and release terrorists just for the privilege of  sitting down at a table with a society that glorifies civilian murderers, then raise your hands!

If you think that Israel should bow to American pressure, endanger the lives of its citizens and soldiers, and free murderers while the US refuses to free Jonathan Pollard, raise your hands!


As we've seen in the past, "only the Likud can do it."  That is why I don't vote Likud.  Remember that it was the Likud that gave Egypt the Sinai and produced Disengagement, which provided the Arab terrorists with convenient launching areas for missiles against the Israeli South.  I miss the days when the Likud was in the opposition and prevented the Leftist Labor party from doing things like that. I'm not afraid of having the Likud in the opposition.

The Israeli public does not see the point of the faux peace talks, especially when we aren't negotiating.  We're capitulating to all of the terrorists' demands.  And what are Israel's demands?  Do we have any?

Just in case you're curious, here's the cabinet vote re: Arab terrorist prisoner release just to "sweeten" the pre-talk package for the terrorists:

It is good that I believe in G-d, rather than in princes and nobles, or I would not be able to get out of bed anymore.

Bravo Batya on another great post that hits the nail right on the head....Ruti, when I used to go to meetings with yidden from all streams (We did this for 5 years; Rafi Seri from the Gush started them,) some of the irreligious folks openly said they envied our faith. I.E. when someone died they felt helpless to comfort someone else as they didn't believe in Olam Haba...

Israel are not demonstrating it because it will make no difference!

Israel's government has more absolute power than the Communist Party of the Soviet Union had at its height. It can set aside laws and court judgment when they are politically inconvenient.

And it shrugs off protest like water sliding off a duck's back. Plus, it can count on Israelis' short memories to enable its abuses of them to be quickly forgotten!

Israel has the perfect dictatorship.

How do we change this corrupt system? The PM always gets what he decides. He decides only what is acceptable to the Atty-General and the Supreme Court and what will look good in the media. Look around you in the world. There is no democracy. Procedurally there are elections, but the elected officials have no real power.

Norman & goyisherebbe both got it right! Lots of tefilah is in order!

Unfortunately we have an elected dictatorship. Do they teach that in Political Science?

Dear Batya, The book, "When Silence is a Sin" is a beautifully written small book,compiled with rulings based on "The Code of Jewish Law" (Shulchan Aruch) the "There can be no contemplation of compromise and compromise is forbidden,based on the Shulchan Aruch that any abandonment of land poses a grave security to the residents of Israel.The Lubavitcher Rebbe maintains that the Jewish people must take a strong stance in relation to the nations and not be timid and self effacing before them." "It is forbidden to cede even a small piece of the Land of Israel to a non jew," "The entire Land of Israel belongs to every Jew and to all the Jews and no one has been appointed custodian with the right to change this neither a gentile or even a Jew."