I had first learned that there were Jews in Ethiopia before my own aliyah from New York in 1970.  Somehow there were Ethiopian Jews in New York during the 1960's, and Sybil (Kaufman) Kaplan led their Israeli dance group, Tza'ad Rishon.

Later on, years later, Ethiopian Jews finally began arriving in Israel.  My daughters all spent some of their Sherut Le'umi, National Service time helping them.  My youngest daughter even traveled to the "Compound" in Addis Adaba for two long periods of time.  The second was over Passover and she was accompanied by my middle daughter who considered the mission important enough to miss a couple of weeks of her law studies.  (That's why there are some Ethiopian souvenirs in the house.) 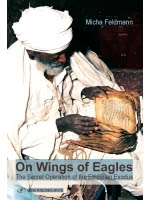 A few months ago, I received a book to review, On Wings of Eagles-The Secret Operation of the Ethiopian Exodus by Micha Feldmann, Publisher: Gefen Publishing House.  It took me a while to find the time to read it.  I finally read it during the Jewish Holidays, and I'm glad I did.

Feldmann has compiled (and no doubt) edited the diaries he kept during the decade he worked for Ethiopian aliyah as his Jewish Agency job and later on as part of the Israeli Embassy staff.  During parts of that time, he was living in Ethiopia, while his family stayed in Israel.  At no time was this an easy job.  Conditions were harsh.  Feldmann had to deal with horrendously difficult logistics within Ethiopia and an uncomprehending Israeli reality, too.

A few years ago I taught a group of Ethiopian high school students who all used their Ethiopian names. Those names were totally unpronounceable and forgettable for me. I tried to convince the group's coordinator that it would be much better for the girls' successful absorption in Israel if they could each choose an Israeli name.  I myself had done that.  My name "Batya" just sort of "came out" when I was introducing myself at my first Betar meeting.  My Jewish name, Baile Rochel, just didn't seem suitably Zionist; I use it for my humorous articles.  And my husband had started writing under the name "Yisrael Medad" for Betar before we had even met, so Medad was the obvious name to legally replace Winkelman, less than three years after our aliyah.

Considering that we had legally changed our names and are happy we had done so, I didn't think my suggestion to be problematic.  But Feldmann is one of those who is in favor of the Ethiopians keeping their old names.  He explains why in the book, but I will always disagree on it.  I think that names are very important for first impressions.  One can be very creative in terms of Hebrew names, by choosing one that means something linguistically, sound-wise or Biblical character or place.  Choosing from the same "pool of names" is related to various Jewish "eidot," galut-based Jewish cultures intermarrying and melting into one people.  We must all unite as One Jewish People and not keep separate.  By perpetuating the old foreign names, we delay this important step towards Redemption.  I also don't like the Israeli Chabad custom of giving Yiddish names instead of Hebrew ones.

One of the things I do like about Feldmann's book is his honesty, the fact that he describes, admits emotions and feelings, even the negative.  It's obvious that he sincerely loves the Ethiopian Jews and was willing to do everything possible, even at the risk of his own safety to facilitate their aliyah to Israel.

For Feldmann, each of the immigrants and potential immigrants is a person, not just a number or anonymous file.  This is rare in an operation of such magnitude and difficulty.  Feldmann's story predates my daughters' experiences with Ethiopian immigrants, since he was involved with them while they attempted to get to Israel by trekking and being smuggled via the Sudan and various transit stations there and in other countries, since there wasn't any direct route feasible from their outlying villages in Ethiopia to Israel.  The percentage of Ethiopian Jews who died on the way or while waiting in transit camps was extremely, tragically high.  You can feel Feldmann's pain as he writes of it in his diary.

On Wings of Eagles-The Secret Operation of the Ethiopian Exodus by Micha Feldmann is definitely a book worth reading.
Posted by Batya at October 15, 2012

Shalom!
A friend told me about a group of Ethiopian children who were fairly randomly assigned Hebrew names by their pre-school teacher. That's NOT the way to do it, and occurrences like that may be the reason for so many people being opposed to changing names. Each name has a meaning or an association and a suitable Hebrew version should be found. One of our few merits during our stay in Egypt was keeping our Hebrew names.

In Sweden today, only "Swedish" names may be registered to children born in the country. The world seems to accept that as NOT being a "human rights violation".

The other side of the coin (and there always is one!) is.... what's a Hebrew name? Is Aramaic close enough??!? Will we need a new bureaucracy to decide that? Maybe we should elevate that position to Deputy Minister level, the better to build wall-to-wall coalition governments with! Give the Deputy Minister a limousine and a driver and an armed security detachment to make sure he can elbow his way to the head of the line at trendy TelAviv restaurants!! True Israeli mentality!!

some of the more popular Israeli baby names at the moment come from bible figures who weren't exactly..... paragons of virtue. But hey, whatever.

I guess it's only matter of time before we have a a Gan Yeledim in Ramat Aviv full of 5-year-old Hamans....

Writing as an Ashkenazi Oleh, though currently in London, I disagree with you about Hebrew names being mandatory for those who make Aliyah.

The Ethiopian Olim I have met and spoken with, were given Hebrew names when they arrived but now mainly use them as middle names. They often have beautiful birth names which to be honest, I do not find hard to pronounce or remember. These Ethiopian names help with self esteem and identity in a country where Ashkenazi institutional structures and Mizrachi social culture can seem overwhelming.

Spiritually the gathering of the exiles is laudable and powerful and I agree, a catalyst for Moschiach. Over time I think third and fourth generation Ethiopian Israel Jews will name their children with Hebrew names as the links to the old country inevitably diminish, but for the first and perhaps second generations the names can be an important reminder of where people have come from and what they have been through in order to get to Israel, and of what they can contribute from their culture towards the new society of Israel. Rather this than to be totally rebranded and pushed into a modern Israeli culture which is part artificially constructed, and part naturally evolved without the opportunity to contribute something from the Ethiopian Jewish tradition.
For example I like Klezmer, but there is no halachic reason that I should place it on a pedestal above Ethiopian Jewish music.

The instance that a Hebrew name should be used, in my opinion, is when being called to read from Torah in shul.

Alan, don't take this to a ridiculous extreme, and don't comment as if I said something I didn't.

London Male, re:Jewish Law. A person's original given name at the Brit is what must be used when called to the Torah, not some name given later, even if the original one isn't Hebrew. Only if the Hebrew one is used only, then maybe that name can be used. Generally all of the names are used when called to the Torah. I don't know what Ethiopians do with their mulititude of names. And I'm pretty sure most Ethiopians are giving their children Israeli names at birth by second generation.

Thank you Batya, was not aware that the name at a Brit had to be used when called to the Torah.

LM, that's the official Jewish name unless it's changed according to a halachik format. And if a girl gets her name in an official "misheberach" naming, it must be used in all Jewish events like marriage etc. Other names can be added.

On is reminded of all these "Shiddduch Crises" blogs wherein anything westerly of the West Side Highway is "out of town".... a no man's land. After all, where would they buy their black fur hats?!??

Batya, there was a Hebrew-ish community in Ethiopia 500 years before the Babylon returnees to Jerusalem invented the idea of a unitary "Judaism".

Alan, ???
If you know anything about the modern Ethiopian Jewish history, you'd know that they weren't mobile.
I'm trying to get more information about the dance group.