Feeling The Pain of Israel's South

Those Israelis who ignore the fact that the Israeli south is under attack by Gazan Arab terrorists must be neurologically impaired.  We are all one nation and one country.  If you can't feel the pain and panic and destruction, then it's as if your nerves are blocked.  Sharon Katz of Voices Magazine expressed it perfectly in her post,  I am from the South. 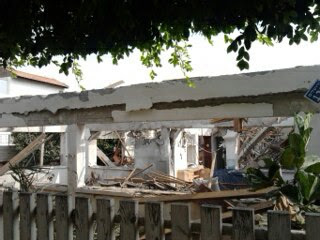 Sharon and I have some good friends who live in the Negev and keep us updated with reports and pictures.  Isn't that what facebook was really invented for?

Dozens and dozens and dozens more of deadly missiles have been launched against Israel by the Arab terrorists.  All the Israeli Government keeps saying is that they'll do some "cosmetic surgery" on the buildings in the south to "protect" people.  Nu, that won't really help; it won't stop the attacks.  It'll just make them try harder.  It's like "protecting yourself" from a dog attack by trying to kick it.  The dog will only get more aggressive.

From what I've read, that Iron Dome only intercepted about 10% of the missiles, seven out of sixty-nine, according to the Israel Hayom article.  And who knows how long and how effective the cease fire will be.  Been there, done that.  They only last long enough for the Arab terrorists to re-arm.

A word to the wise, please don't rely on the big international news sites like CNN, because you won't get the news there.

Following are quotations from my friends in the south:


Please excuse me for not saying good morning, I feel ill...yesterday my neighbours were bombarded with 80 plus missiles. People were injured some badly some lightly. Families lost their homes and what did my government do...not end the terror but as cowards agreed to some Egyptian led cease fire... I want to scream!

...you asked about Ashdod. My son said all they are firing are short range kassams and mortars. To reach Beer Sheva, Netivot, Ma'agalim, Ashdod and anywhere else they need to use long range Grads. They know if they shoot 30 Grads we will go to war. Tomorrow starts a 4 day chag (holiday) for them and they don't want a war.

Here is the scenario...rockets are flying fast and furious, the IDF orders resident 10 KM or less to stay close to safe rooms, school is cancelled and as I look out of my kitchen window I see 6 kids playing soccer on the street... Maybe the kids should be in school... Dam if you do and dam if you don't.....

for D's kids their school is totally fortified...but the road the bus needs to take to get them from home to school is very, very dangerous... Most area schools are not totally fortified and all it would take is one panicked child to set everyone off... You need to be a Solomon to solve this problem..

...just about 2 years ago a bus was hit by a kassam on the road that 5 of my kids travel on. One of the boys on the bus was killed.Who will take the chance of a repeat?

My brother-in-law is a garbage man. He works in rain, blazing sun, freezing cold, hail and KASSAM ATTACKS. He was just here and told me that this morning he was in Kfar Maimon (where my kids go to school) & a kassam landed about 150 meters from him. There is no place to hide, all you can do is pray. The garbage truck has some small holes from shrapnel but B-H he is PHYSICALLY fine.

Real people with real families live under constant attack.  We need to destroy the terrorists!!! That's the only solution!!!!
Posted by Batya at October 25, 2012

Batya... Thank-you for telling our story..the media certainly doesn't including the Israeli media....

We in the south need outsiders like you, to spread the word.

May Hashem shower you with His Blessings...
Miriam