I don't think this Tunisian "uprising" is anything new or unique in the Arab world. 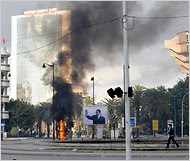 Aren't there similarities to the violence in the 1979 overthrow of the Iranian Shah? 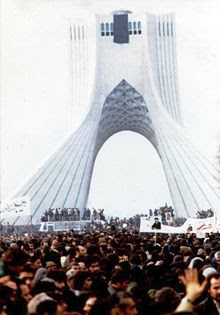 There was certainly no peaceful transition from Shah Mohammad Reza Pahlavi to Ayatollah Khomeini.  And how are things in Iraq?  Two more American soldiers were killed there today.

I don't feel like doing a thorough research, but I know if I did I'd find many more examples to prove the violence in Arab societies.  That's another very important reason that nobody in their right mind can believe that a Pseudostinian AKA Palestinian sic State could be contained, would accept restrictions and would refrain from attacking Israel.  The establishment of such a state must be prevented.  The enthusiastic support for such a state by United States President Barack Hussein Obama endangers world peace.  Countries have been announcing their recognition of the proposed state.

Not only would it be extremely dangerous for the continued existence of the State of Israel, but it would embolden Arab and Muslim minorities in countries all over the world.

It's better to say no now than deal with that dangerous future.
Posted by Batya at January 15, 2011

I just got off an airplane from TVL to Bangkok. I friendly Jew and I began talking as I was putting away my T'fillin from Dovening.

We were talking about the steep increase over the past few years in the price of housing in Aretz Israel. So I asked him what he thought would happen if (G-d Forbid) the government gave away half of Aretz Israel (I say again G-d Forbid!) to the PA for yet another arab state; what would happen to housing prices then?

His reply didn't startle me but sounded more like a pre-programmed recording "We must give away the land if we want to have peace." My Rav would advise me "Yechiel please change the subject. Israelis can be difficult and hard headed at times..." However I did not head this hypothetical advise.

I asked the man a simple question. How can 2.5 million Arabs live long term in a land that is smaller than Delaware the 2nd smallest state with a population of 1/3rd this size. I asked him what he thought if more arabs would come across the porous border between Jordan and what would then be palestine? Soon the population would swell to a few million more - 4-5-6 million arabs.

I asked now that this occurred would housing prices for arabs sky-rocket? Wouldn't based on a perfect record of arab nations having a vast expanse between the haves and the have nots; wouldn't this new nation either A.) end up like Tunisia (which is not good for Israel or B.) Look at its Western neighbor for another slice of the pie? I also reminded him that at this point 75-80% of Israel's population would be in range of quassam, motar or rocket fire.

How does this bring peace? Placing your neck in the guillotine of your sworn enemy does not equal a peace which is good for BOTH sides.

Yachiel, you did the right thing. We mustn't be silent.