Do you think France's Foreign Minister, Michèle Alliot-Marie, was surprised when demonstrators began to riot and pelt her with eggs during her visit to Gaza?  If the Gazans are so poor, why did they waste all those eggs? Eggs are very healthy, the perfect, complete protein.


Alliot-Marie had just blamed Israel for the Gazan violence, which she attributed to Israel's blockade of Gaza:

"...she called on Israel to lift its blockade of Gaza, saying it had increased poverty and fed violence." 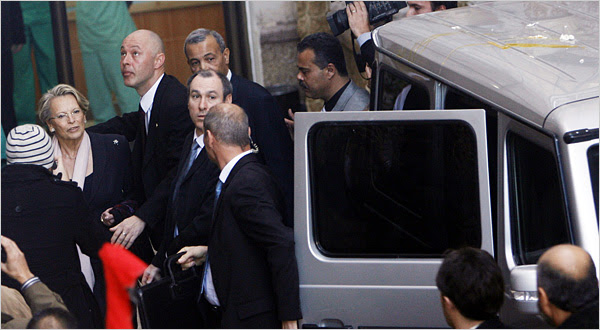 It's believed that the rioters were angry, because Michèle Alliot-Marie had expressed support for releasing Gilad Shalit from captivity.


Following the meeting, Israeli radio posted a story on its Arabic-language website in which it quoted Alliot-Marie as saying that the European Union "must condemn the war crime that Hamas is comitting by keeping Gilad Shalit in captivity."

What she had actually said was that she would "pass on a message (to the EU) that the prisoner should receive Red Cross visits." 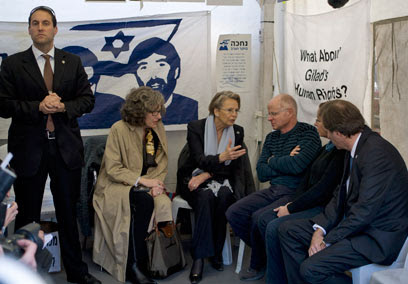 I wonder if the eggs knocked some sense into her.  Visits from the Red Cross to Gilad Shalit aren't enough.  Too many years have passed.  He must be returned home to his family in Israel.  If the Red Cross wants the honor of bringing him home, fine, but just to visit him isn't enough.
Posted by Batya at January 22, 2011

Maybe, it's just a matter of misunderstanding Alliot-Marie which led the protesters to "pelt her with eggs" or the Gazans were just so plain angry with her, they don't want to hear her. I can see that much chaos can result due to the language barrier.

Are you justifying their attack on her? What would have been so terrible if she had said what they claimed she said?

Shalom!
Did the fact that the Arabs pushed two children in front a car to stop the convoy make news in most of the media, or just on INN? In what culture is that acceptable?

you know, theres a way for both her complaints can be solved. if gaza would simply free gilad then israel would free up the borders.
like thats gonna happen...
i really think the french should deal with their own arab problem first.

Hadassa, I didn't hear that either. You can't make peace with such monsters.
a, they don't want to solve problems