If Egypt's Mubarak is in Danger, No Treaty/Peace Deal Could Be Relied On

I'm pretty sure that the general consensus (not me, of course) had been that Israel could count on Egypt's Mubarak as a stable ally, peace partner/broker etc.  Remember that a treaty is only as good as the power stability of the signees.  Especially in the Arab world, you can't expect a political leader to follow the policies, treaties of predecessors, especially if they violently overthrew that predecessor on the way to power.

That's why Israel should be taking what's going on in Egypt very, very seriously.  There's a violent uprising against the government.  Hosni Mubarak had been trying to install his son Gamal to succeed him, but instead of that, Gamal and mother have fled the country. 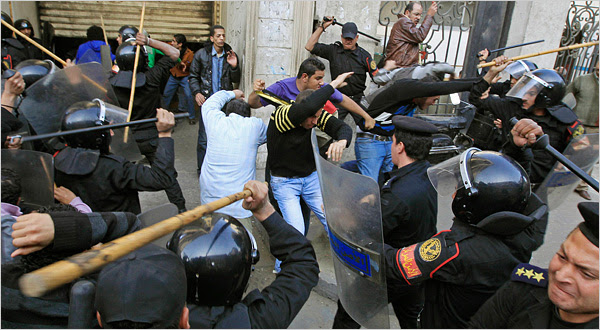 The United States and the New York Times seem to have already written off Mubarak and are showing sympathy to the rioters.  That's bad news for world peace.
Posted by Batya at January 28, 2011

There is "no peace" if peace is enforced on the Arabs by brutal regimes. Muburak is a brutal dictator who is hated by his people Supporting him "for the sake of Israel" only inflames Arabs even more against yes Israel and the United States. Understand the people blame both countries for the man being in power because guess who gives him military and financial support?

Nobody has to support anyone "for the sake of Israel." The inherent instability in the Arab regimes and lack of democratic culture should be an American, western concern. They, you, shouldn't think that the rioters will be an improvement.

The problem is, democracy leads to the voice of the people being expressed in leadership.

When the voice of the people is wicked, the democracy is wicked. Sadly, that's what has happened in EVERY Arab State that has experimented with democracy - the people have elected Islamist regimes (e.g. Alegeria, Palestinian Authority).

What's good for the goose IS VERY GOOD for the Islamist Gander.

How is it "bad news for world peace" when people protest against a dictatorship and the "lack of democratic culture?" Unless you intend to say that, "It's better for a people to be denied civil rights, a stable infrastructure, and the glimmer of opportunity to escape poverty", your logic is flawed. Work it out.

a, I think you're on the right track.
Bells, this is rioting. It doesn't seem to be led by the type of people who will make life better for anyone. They're just fighting over the pie.

What worries me is the resulting instability and anarchy.

Bells, get back to us when the people of Egypt hoist the Muslim Brotherhood into the leadership position.

Good luck with that!

Shalom and shavua tov!
Shy Guy, the Muslim Brotherhood was our topic of discussion too, once Shabbat was out. All those Egyptians rioting for a better life are going to have to be very strong - and they may not be capable of being strong enough - or else the Muslim Brotherhood is going to quickly take advantage of the situation.

yes, all they'll get is a new dictator, probably worse than Mubarak.

Then I guess they're not supposed to struggle for freedom or self-determination. They should just grin and bear it, and cast meaningless votes in rigged elections. What's good for some just shouldn't be allowed for others. I've seen the light.

Bells, if you believe that, I can sell you a bridge...

I am sorry that Mr.innocent Egyptian is suffering under a dictatorship. That is a shame. My heart also goes out to the hungy in Africa and the flood victims in Pakistan and I mean that seriously!

However when push comes to shove, my priorities are the good of Am Yisrael in Eretz Yisrael above all else.

I abhor Mubarak. Nevertheless, better the devil you do know than the devil you DON'T know. The Muslim Brotherhood which has been brutally disenfranchised is no lover of Jews. And, they would probably be as corrupt as all of the other Arab governments in the Mid-East should they come to power.

Here is a portion of a short e-mail I received from a lady in France. She is the sister of an elderly giyoret whom I visit weekly at the closed facility where she lives here in Netivot:

"Right now I am minute-by-minute following what is happening in Egypt -- I have special news sources for intelligence reports -- and one of them has sent an Alert that all Egyptian troops, guards, etc. have disappeared from the Gaza border with Egypt, and that Hamas operatives are freely crossing over to meddle with Egypt's "revolutionary" groups."

I am exceedingly worried. No guards on the border means vast influx of rockets and ammunition as well as thousands of Sudanese and other African refugees.

It is a crying shame that President Obama did not demand Mubarak lessen his stranglehold over his nation and grant his people rights before transferring the millions of dollars in aid that America has bestowed for years.

thanks for that update, and newscast