Facts in Fiction, Daniel Silva Should be Taken Seriously 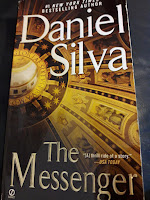 Over the years I've blogged a few times about the very true lessons we can learn from the movie The Siege, Fact and Fiction, "The Siege." Recently I've been reading quite a few Daniel Silva books, and even though I have no idea what his politics are, I see some important lessons there, too.

In pretty much all of Silva's spy, adventure novels I've read, there's a foul up caused by American "help," interference and demand for control. Just like in The Siege, there's an inherent American incompetence and built in leaks. Of course I don't know what percentage of these repeated foul ups/disasters are based on fact, but from my vantage point in Shiloh and the fact that I've been a longtime political observer, they ring very true.

It's no secret that the American State Department is anti-Israel and antisemitic; it has always been. Israel isn't treated fairly, fact not fiction.

Right now I'm reading Daniel Silva's The Messenger, and I came across a line that rings so true.


This is a major problem in Israeli policy, the quest to be liked. Unfortunately, there isn't any form of or tactic in hasbara-information campaigns or "rebranding" which can delete or even reduce the inherent anti-Israel and antisemitism that exists in NGOs, other countries, diplomats, accademia etc. Internationally, there's more antisemitism than had existed as the Nazi Final Solution was reaching its crescendo.

And the feeling of national guilt which had existed in Germany and parts of Europe post-World War Two has ended. The Nazis' grandchildren and great-grandchildren are leading the anti-Israel pro-Palestine movements. Unlike their parents, they won't even fund memorials.

So we here in Israel must forget about being liked; it just won't happen. Let's just take off the gloves and destroy our enemies. That's the only way to bring peace.
Posted by Batya at July 17, 2018

Oh, I like that: "Let's just take off the gloves and destroy our enemies. That's the only way to bring peace.”

I think Mashiach will be doing that real soon.

Did you read about the year 2020?
i.e., that it will be the year of the biggest and last aliyah.

Israel could not finish-off its enemies
when Barack “Love Islam” Obama was president.
That is understandable. But now, THANK G*D,
we have a pro-Israel USA President.

If Israel can’t finish-off its enemies when
there is a pro-Israel USA President, then when?

One example: Daniel Pearl was murdered by Muslim terrorists:
https://en.wikipedia.org/wiki/Daniel_Pearl

So far as I know, Israel does not inflict any punishment or penalty on journalists who treat Israel unfairly; therefore, the same journalists who would never dream of criticizing Muslims feel free to attack Israel relentlessly.

My suggestion to the government of Israel (in the extraordinarily-unlikely scenario where they would actually listen to me) is that no journalists be admitted to Israel, except those have proven themselves to be pro-Israel.

International journalists who falsely slander Israel or reveal Israel's military secrets should be thrown in jail.

Israel-bashing newspapers that should be eternally banned from entering Israel include: The New York Times, The Guardian and the BBC.

Mr. Cohen, we must bring the Moshiach without fear.