The Jerusalem Post had a feature article in its Friday edition titled:


ARE PALESTINIANS READY TO TELL ‘SUPPORTERS’: ‘WE'RE NOT YOUR TOY’? 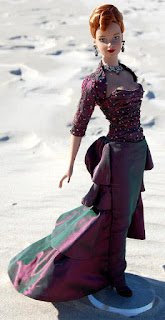 No surprise, but the writer got the whole "Palestinian thing" all wrong, because it didn't get to the gut/history of the issue.

"Palestine" is the Barbie Doll, the toy invented by anti-Semitic Europeans and British who were determined to sabotage the Zionist efforts to promote Jewish Nationalism and its aim of re-establishing a Jewish State in the Biblical Holyland.

There is absolutely no history of a Palestine, people, nation, culture. And the so-called Kingdom of Jordan is even a bigger fake, invention. The British moved the Hashemites in, even though the land east of the Jordan River was supposed to be part of the Jewish state, and anointed them rulers over the nomads residing there. This was in direct contravention of the Mandate, the assignment the British had been given by the League of Nations.

But as you most probably have noticed, the world didn't care. It's very similar to the way the world powers, at the same basic time, reacted to the rising antisemitism and violence against Jews in Nazi Germany.

And after World War Two, the British did everything in their power to keep Europe's surviving Jews out of the Holyland, while simultaneously helping to strengthen the Arabs.

Yes, there was a United Nations vote November 29, 1947, supporting the establishment of a Jewish State, but it had no "teeth." The Jews would have to survive a "fire test," a war during which surrounding Arabs, armed and trained by the British, would attack them. The UN suggested a further division of land between Jews and Arabs for another new Arab state. They drew a map assigning small amounts of land in various disconnected locations for the "Jewish State." The Jewish Agency accepted it, despite the dangerous borders, but the Arabs refused insisting on more.

After the ceasefire in 1949, Jordan illegally occupied the land not in Jewish hands, including half of Jerusalem. No surprise, that there were no formal complaints by the world powers of the time or from the United Nations.

In the decades since, these same countries, diplomats and NGOs have been creating their Barbie doll, financing "her" every whim, paying for everything and turning a blind eye when their toy literally terrorizes Israel. And in 1967 when the Arab countries surrounding Israel gathered their forces and threatened destruction of the Jewish State, nobody cared or tried to stop them. The State of Israel fought a brilliant and miraculous war in which not only did it survive but it liberated all the land to the Jordan River, the Sinai and the Golan Heights. Only then did the world get angry. World powers, NGOs etc got angry with the State of Israel. And then their toy, the so-called "Palestinians" were given a makeover to look moderate and deserving.

The  so-called "Palestinians" are a toy. It never would have existed if other countries hadn't invented it. It's no more than a bloody Barbie doll.
Posted by Batya at July 08, 2018

They're all anti-semites; Britain being at the top of the list, always. No surprise. They cannot rest until they think they can stop the Jews/Israel from existing, but, B'H, nothing will help them. The script is playing itself out and soon redemption will come but they're not going to be too happy! Too bad they have so much help from the Erev Rav, their allies. But, H' has His Plans!

In the original Twilight Zone television
series that ran from 1959 to 1964, there was
one episode with a killer toy doll named Talky Tina.

This toy doll eventually killed a man,
who was played by actor Telly Savalas.