I had an offer I couldn't refuse yesterday.  A neighbor said that she'd be going to Matan for their Fast of the 17th of Tamuz program. Now, even though I prefer spending my fast days dozing and lounging around... I just had to go, especially since some of my favorite Tanach, Bible teachers were teaching.

There were three sessions of classes from 8:45 until 1pm, with a choice of Hebrew or English. The Hebrew classes were in the auditorium, and the English were in a large classroom. But the classroom wasn't large enough.

We squeezed in for Yael Liebowitz, who is one of my favorite Matan teachers. I have been taking her courses for a few years. 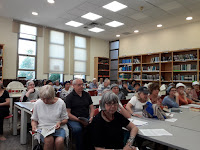 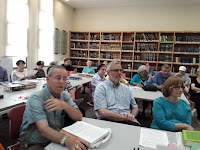 Leibtag spoke the same time that very popular speaker Racheli Fraenkel was lecturing in Hebrew. Some of those who attended Leibowitz's talk went down to the auditorium, but many more started their day at 10:15 with Leibtag. That's why the Beit Medrash was so full. 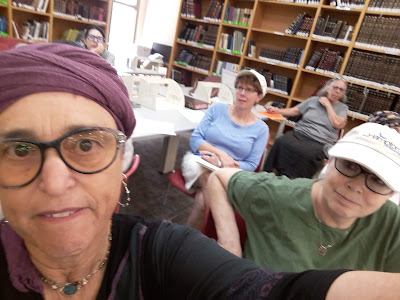 I am glad that I stayed upstairs to hear Leibtag, because he filled in many of the gaps in my basic knowledge of the history that parallels the Tanach narrative.

Every teacher has a different way of presenting the same material. I really didn't mind that both those lectures discussed and clarified the almost "mantra" which says that the First Holy Temple was destroyed because of "idol worship," and the Second Temple was destroyed because of "baseless hatred."  Apparently, both types of sins were rampant before both Temples were destroyed. Things weren't so simple. During Leibowiz's lecture, she mentioned that עבודה זרה avodah zarah, isn't really idol worship. It's more an incorrect attitude towards Gd and other religions. Even giving legitimacy to another religion, equating it as a legitimate/equal choice is forbidden. Also claiming non-Jewish values as Jewish is forbidden. That reminded me of how Gd punished/killed the sons of Aaron the Priest, because they worshiped in the Holy Tabernacle with an אש זרה aish zarah, strange/foreign fire. 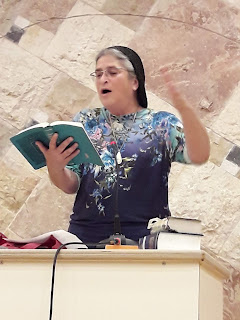 For the third lecture I went down to the auditorium to hear Taphat Halperin in Hebrew. I've been studying with Taphat this past year in the Senior Citizens Program in Ofra Girls High School. She, davka, quoted from many of the same bible verses as Leibtag.

By then I was pretty tired, due to the fast and not sleeping all that much the night before. So I must admit that I wasn't up to taking notes. Gd willing my mind will find a way to process it all. Some of what she said was familiar, since the course in Ofra is also about the period between the two Temples, the exile and return.

From when I first started taking Tanach courses, here in Shiloh, I've said that it's like trying to assemble a puzzle that has thousands and thousands of pieces. Just connected a couple here and there is a great accomplishment.

I must thank everyone, Matan, the lecturers and my neighbor who took me, for a wonderful morning of learning.

PS Yes, I highly recommend studying in Matan, and if you're too far away, sign up for their online lectures.
Posted by Batya at July 02, 2018

yes, but the big question is:
What is "avodah zarah?"

The sin of idol-worship [avodah zarah] is
when any human worships anyone or anything
other than the G*D-of-Israel.

Actually, that's the popular translation, but it's more worshipping in a non-Jewish way or non-Jewish values which are incorrectly labeled as Jewish.