Southern Israel is suffering from a burning plague of Arab terrorism. Cheered on by various NGOs and supportive countries, the Hamas terrorist Gazans have been launching incendiary kites, balloons and other devices at Israel. 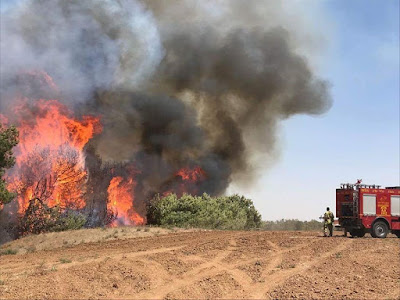 The international media has been ignoring the terror here, but they publicize the death of rioters and terrorists as if they were innocent bystanders. Nobody cares about Israel.

Arab terrorists are burning our land, fields, orchards and more. It's only due to Gd's mercy and love for us that the fire weapons launched by the Gazan terrorists at us haven't burnt up homes, schools, clinics etc. The fact that numerous Israelis haven't been killed isn't because these weapons aren't dangerous. The Arabs want to kill us. And the world doesn't care. For that I am burning with anger!

If they Arabs cared about the Land, they'd treasure it and not burn it.

I'm burning with anger that the world sympathizes with the terrorists and not the victims.

Deja vu, so much like the 1930's and the rise of the Nazis in Germany, then Europe. Nobody cared about the discrimination and then systematic murder of the Jews living there. Nothing's new, and I'm burning with anger!
Posted by Batya at July 05, 2018

Batya, thank-you for your blog. MSM is totally silent. The world doesn't know what Hamas has been up to these past 100 days. Yes, Shabbat will be 100 days of molotov terror fires. We are living with miracles from Hashem. No physical injuries to the population or firefighters but emotional injuries are plenty. May Hashem continue to protect our marvelous firefighters and the IDF.

Maybe I am totally wrong about this,
but maybe the trees in the Land of Israel
are burning because Jews did not sufficiently
THANK G*D for those trees.

We Jews must THANK G*D for the
land and for the tree and for any water
that exists in the land and for every
peaceful day and for Tzahal/IDF.

According to Sefer HaMidot by
Rabbi Nachman of Breslov (of blessed memory;
may his merit shield us), these sins can
cause burning: hate, mockery [letzanut],
idolatry, forbidden marriages, sadness,
failure to help the poor, jealousy,
bribery and causing others to sin.