Teshuva, Tested at The Kotel

Yesterday I found myself walking through the Old City to the Kotel. I had a few hours in Jerusalem with nothing to do. And since I'm in the year of mourning for my father, even though the Jewish Holidays, Rosh Hashanah, Yom Kippur and Succot are almost here, I didn't buy myself new clothes. Actually, I still haven't worn the new clothes I had bought for Passover, because my father passed away just a few days before the Holiday. Yes, I should get someone to wear them... then I can.

So, as I've done quite a few times before, I decided to "hangout" at the Kotel, especially the small room on the side of the Women's Section. The last times I had been there it was very comfortable and peaceful, with the air-conditioner going, and nobody to bother me.

I sat in the back for various reasons. One main reason is that I don't need or want to touch the wall, which isn't all as holy as some people think. And that's besides the fact that we do not need something so physical to touch/reach Gd. I've written many times that I do not get inspired by visits to graves and tombs, no matter who's buried there. 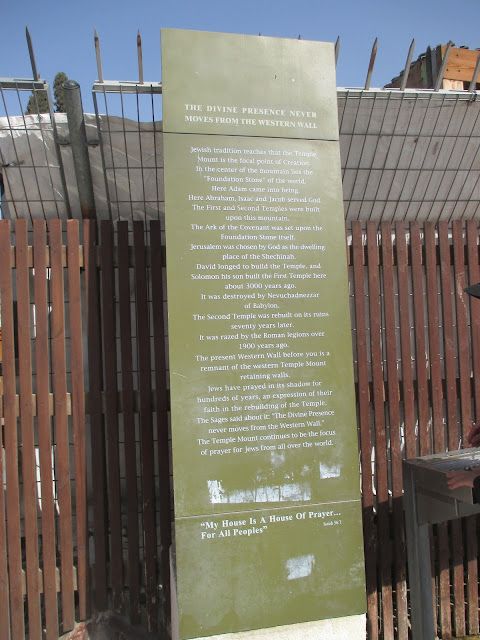 The truth is this "western wall" is not the Western Wall of the shechina, Gd's presence. This wall that is so worshipped is none other than the most outer wall of the compound, a retaining wall, which holds up the Temple Mount and keeps it from collapsing. The Holy Temple itself was quite a distance inwards, and its walls cannot be found or seen. If you read this sign, to the very end they do admit it. As I've said many times, I feel more Kedusha, holiness, in the area of Ancient Shiloh, which had been a place of Jewish Prayer for centuries.

This time, as I entered the room, I noticed that the airconditioner was not working. And even worse, the woman next to me smelled, and one is forbidden to pray by bad odors. It took awhile for my sense of smell to become oblivious to her. Then I said my usual Tehillim, Psalms. Just as I was about to pray the Afternoon Mincha Prayer, there was a commotion in the front, and a woman began talking out loud. She began shouting, saying names, praying for people in the "name/holiness of the Western Wall..." sounding like a chassidishe Billy Graham. 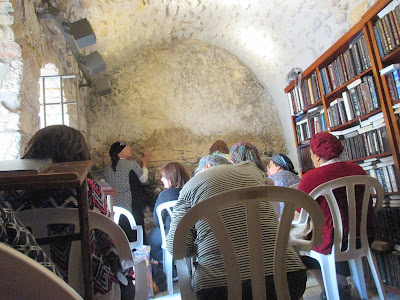 I was not amused, nor was I inspired, but let's call it my Elul Teshuva Test  I did not tell her to shut up. And as she got more "inspired" and enthusiastic as some other women shouted names for her to pray for, I quietly walked out. 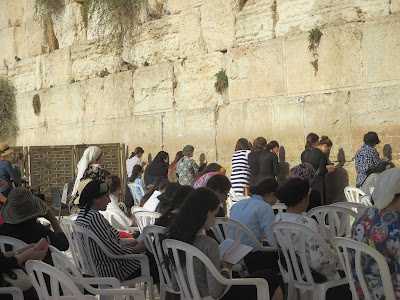 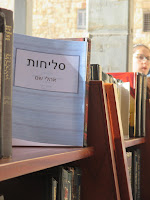 I found myself a quiet corner and prayed. And then I noticed that there were some Selichot books on the nearby shelves, and I took one. During the days before Rosh Hashanah, we are supposed to say these special penitential prayers. And since there aren't too many, if any, synagogues in downtown Jerusalem with open Ezrot Nashim, Women's Sections, I can sit and pray in, I made myself comfortable and prayed.