All over Israel there has been great excitement and stress, too, about the beginning of the school year. Lots of impressive ceremonies have been held before the school year actually began. 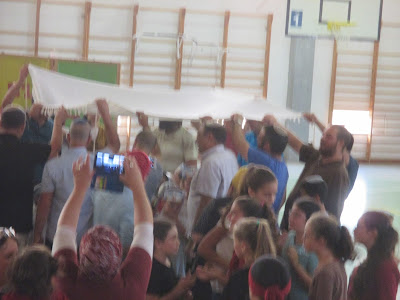 Facebook is full of photos of little kids schlepping heavy bookbags/backpacks etc. In Yafiz, the clothing store where I work, parents have been feverishly buying the simple T shirts stamped with school logos, which is now considered the "school uniform."

Due to the healthy and high birthrate here, Israel's Ministry of Education and various municipalities have been going crazy trying to come up with an ever-increasing number of classrooms. It's a challenging puzzle finding suitable space for all the students, Jews and Arabs to study.

Most of this is perfectly normal, at least here in Israel. The classroom shortage is all over, and many children study in trailers, Jews and Arabs. I'm pretty sensitive to the issue, since I was in a very overcrowded school as a kid. We had double session until (including) the Second Grade in PS 46, Bayside, NY. But a few years later, the school was already pretty empty, since families were small and few had moved out to be replaced with more younger families. But in Israel, most neighborhoods keep getting younger and younger.

One of the newscasts this week got me very angry. They were focusing on the problems in the Arab neighborhoods of Jerusalem. There are families/students who are complaining that the Israeli curriculum is taught in Jerusalem. They want the "Palestinian, sic, curriculum." That's a lot of nerve. Let all of those families leave Israel, leave Jerusalem and move to Ramallah, Jenin, Bethlehem or one of the Arab villages etc. Let them give up their rights as Israelis including our excellent healthcare, infrastructure etc. Let them enjoy the corrupt rule of the P.A. Palestinian Authority! And for those who want the Jordanian curriculum, let them move to Jordan!! There's no reason for my Israeli tax money to be paying for Arabs to learn to hate and murder us! If they want to study as if they aren't in Israel, let them leave!!!
Posted by Batya at September 01, 2016

This is what happens when you give evil a crumb, they soon demand the whole loaf. Unconscionable. Refuah shleimah to this sicko world.