Third body found in the Tel Aviv construction site collapse
The search for survivors continued Tuesday morning, with four construction workers still missing at the site of the collapse.Soldiers began a search and rescue operation on Monday afternoon with two victims successfully extracted by Monday evening.
Police received reports of a building collapse on the corner of Habarzel and Hanahoshet Streets at 11:24 a.m, on Monday, and responded within minutes.
Rescue workers continued working into the night in an effort to recover those who remained missing. (Jerusalem Post)

Apparently, the owners had decided to add a "minor" "design element" to the plan without properly checking engineering feasibilities/ramifications.

Building engineering is a very mathematical science. Add a floor to a house, or a garden to a roof, and you can easily have a disaster, like there was yesterday in Tel Aviv.

I kept seeing this deep sand-filled pit on television and wondered how it could have happened.


Where were the support pillars? How could it have happened? Apparently, the owner had decided to add a garden on top and like many of us, figured that "a garden doesn't weigh much." As the tractor brought in the soil, the entire structure collapsed like a house of cards. Because the truth is that the tractor and packed soil for a garden are much heavier than cars. And apparently, the garden hadn't been in the original plans which the engineers had received and planned for.

Who will pay in the end? Construction workers were killed and injured because of this. 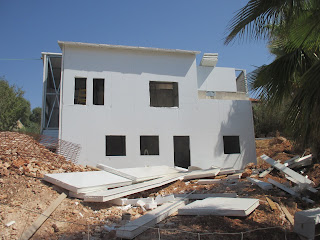 I am certainly no expert in building, but I'm not the only one who looks warily at the modern, quick construction materials being used in our neighborhood. They just don't seem as safe and strong as the bricks we used on our homes. For sure they will need fire alarms all over the place. What do you think?
Posted by Batya at 8:54:00 AM