The New Latma with English-Subtitles, Enjoy!!

Thanks to Caroline Glick's Latma team for translating (subtitles) the new Latma, the Right Israeli satirical show, which now appears on Chanel One every week. It's longer than the old Latma and has mostly different actors.

Latma is otherwise still the Latma we knew and loved when it was an "unofficial program," developed by Glick.

Caroline Glick is definitely one of, if not the best political thinkers on the scene today. Her Jerusalem Post op-eds are unbeatable. Here's her latest that has more truth than the rest of the newspaper. 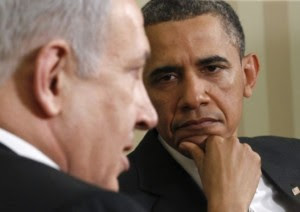 Officially, the election on March 17 is among Israelis. Depending on how we vote, either Prime Minister Binyamin Netanyahu will remain in office and form the next government led by his Likud party, or Isaac Herzog and Tzipi Livni will form a government.
But unofficially, a far greater electoral drama is unfolding. The choice is not between Netanyahu and Herzog/Livni. It is between Netanyahu and US President Barack Obama.
As the White House sees it, if Herzog/Livni form the next government, then Jerusalem will dance to Obama’s tune. If Netanyahu is reelected, then the entire edifice of Obama’s Middle East policy may topple and fall.
Secretary of State John Kerry made clear the administration’s desire to topple Netanyahu last spring during his remarks before the Trilateral Commission. It was during that memorable speech that Kerry libeled Israel, claiming that we would automatically and naturally become an apartheid state if we don’t give Jerusalem and Judea and Samaria to the PLO, Jew free, as quickly as possible.
Despite Israel’s venality, Kerry held out hope. In his words, “if there is a change of government [in Israel], or a change of heart, something will happen.”
Shortly after Kerry gave his Israel apartheid speech, his Middle East mediator Martin Indyk attacked Israel and the character of the Israeli people in an astounding interview toYediot Aharonot.Among other things, Indyk hinted that to force Israel to make concessions demanded by the PLO, the Palestinians may need to launch another terror war.
Indyk also threatened that the Palestinians will get their state whether Israel agrees to their terms of not. In his words, “They will get their state in the end – whether through violence or by turning to international organizations.”
Indyk made his statements as an unnamed US official. When his identity was exposed, he was forced to resign his position. Following his departure from government service he returned to his previous position as vice president of the Brookings Institution and the director of its foreign policy program. Last September, The New York Times reported that the Brookings Institute received a $14.8 million, four-year donation from Qatar, the chief financier of Hamas and the Muslim Brotherhood.... (read the rest of this article; click here)

Unfortunately "The New Latma" is a major disappointment. I strongly suspect that the multi-talented Caroline Glick has almost nothing to do with its dull, unamusing and uninspiring content, which is worlds below that of the original Latma. A silly, insipid skit about a mailman is not what I expected to see on the show (what's satirical about it?).The new show is three times the length of the original, and has about one-tenth of the punch.

Saul, I doubt she has the control she once did, but now at least she doesn't have the fundraising nightmares.
I still haven't seen the 3rd one. It's mixed, but always was.
This is for the mass media versus the social media of the original.