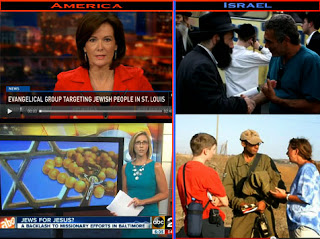 Literally within a minute of each other, on this past Erev Sukkot, September 18th, The Times of Israel published two articles about Christian love for the Jewish people that are worlds apart in every sense.

The prophetic hopes of Israel's Rabbi Eliezer Melamed and his post, "Christians Fulfilling the Prophecy of Isaiah" met the harsh reality of the streets of Brooklyn in the news feature "New Brooklyn Messianic center set to missionize Orthodox neighbors."

Of course what would connect the disconnect between these articles is if Jewish leadership in Israel would come to an understanding that many of  the very same evangelical organizations supporting Israel on the political, economic and humanitarian fronts are involved in supporting a growing Christian messianic restoration in Israel and in missionary efforts directed at the Jewish people.

While Christian missionary "outreach" efforts targeting the Jewish community in the Diaspora are deemed an existential threat, resulting in a zero-tolerance consensus among American Jewish leaders of all sectors, things are ironically very different in the  Jewish state....more
-----
Update of interest: 24/9 10:30pm
The Times of Israel is running a piece by journalist Judy Balint, "Christian Love: Buying their way into Jerusalem". This article exposes missionary Mike Evans and uses and links to much of the research found in Jewishisrael's report "The Day Jimmy Carter Saved the Jews from Mike Evans.
Posted by Ellen at September 24, 2013

How disturbing that Israeli Jews are so ignorant of who they are and about our history, laws, Torah, that they can be so influenced by these missionaries. I think it is really about the power that the missionary groups wield because of their affiliation with higher-ups and the poor and uninformed (like Russian Jews) are receiving benefits from them. Any which way, it is very disturbing and thus bringing the state to great danger, as this is one thing H' cannot tolerate. We pray for His Mercy. We very much need to thank JewishIsrael.Com.

Ellen, thanks for posting this.

a, there's a very dangerous naïveté in some Israelis when it comes to Christians.