Which "New Year" is Yours?

Calendar wise, I guess I'm very schizophrenic combining both the Jewish and Christian calendars.  They both frame my life, give it structure.  I write checks and make appointments on the Christian Calendar, but I celebrate only Jewish Holidays and all family birthdays are according to the Jewish Calendar.

Having been raised in a secular Jewish family in New York, I really didn't know anything but the Christian calendar.  And yes, it should be called the that, the "Cristian Calendar."  It's based on mainstream Christian belief.  We did celebrate various, though not all, Jewish holidays, which fell when they fell according to the Jewish Calendar.  As a child, I was totally oblivious to the fact that the two calendars weren't the same.

This coming week is January 1, 2013, the first day of the next year of the Christian Calendar.

The two calendars are very different, and they aren't the only calendars in the world.

To simplify:
I'd say that the most crucial difference is a religious-cultural one.  I'm referring to how people of the Jewish and Christian religions celebrate their new year. 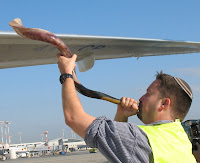 The Jewish New Year, Rosh Hashannah is a very spiritual, reflective time.  It's a two day holiday of prayers and calls to wake up and repent.  The month before Rosh Hashannah is Elul, a time when we are supposed to prepare ourselves for a religious, spiritual, theological inventory of sorts.  That's what תשובה Teshuva, Repentance is all about.  And this process culminates in Yom Kippur, the final Judgement.

We need all of our faculties to do this right.  The Christian New Year is a totally different ball game.  It has evolved into mindless drunkenness and worse.  While we Jews, work hard to heighten our awareness of our sins and apologize to G-d, promising to change ourselves for the better on our New Year, a few months later, on the night of December 31, as the clock strikes midnight and it becomes January 1, people frequently are oblivious to what they are really doing.  Their senses are confused by the liquor and worse they are imbibing.  I don't understand the point of this at all.  It's not my mentality and no longer my culture.
Posted by Batya at December 28, 2012

Even growing up in the US, the most New Year thing I ever did was to watch Guy Lombardo or the ball at Time Square drop at midnight.

Another important difference between the Jewish and secular calendar is that our dates roll over at sunset/sundown, not at midnight, as it was since the first day of creation. That also means that the change of date on the Jewish calendar gradually changes every day of the year, as daytime becomes longer and shorter through the 4 seasons.

When I said I "watched" Lombardo or Times Square, I meant on TV - black and white to be precise.

Actually there is a long tradition of "New Year's Resolutions" associated with the Gregorian Calendar New Year. It has been years since I've watched the New Year's Eve telecasts, but I do remember the hosts walking around the crowd asking individuals what they wanted to do differently in the upcoming year. And January 1 is a Holy Day of Obligation for Roman Catholics -- one of only about half dozen such days in the US!

Shy, I remember those shows in b/w of course. And "midnight" is so artificial.
Charlie, "new years resolutions" are based on the Jewish Teshuva, which is the epitome of self-improvement.

I don't think the western calendar is "christian-based". it's based on the Roman Julian calendar, and then Gregory updated the leap year schedule in the 16th century. if it were "christian-based" then it would start with their major holiday instead of that being about a week before the end of the year.

actually the date of christmas is based on saturnalia, which was based on the time of the solstice. the early church leaders didn't want the people to be celebrating the very-popular pagan saturnalia, so they moved their major holiday to that date, to give them something else to celebrate. christian dates are later add-ins, not originally part of the calendar.

Lea (Ma'Ale Adumim) is the most correct.

>> midnight is so artificial

true, but as you would know if you actually worked the land for a living.... so is setting a fixed moment as being "sunrise" or "sunset"

The further north (or south) you go from the equator, the fuzzier and fuzzier "sunrise" and "sunset" become. Why do you think that they need to publish the rabbinically-decided times? Exactly because you CANNOT really know just from observation.

Some jurisdictions increase the criminal penalty if a break-and-enter was done at night. So they had to define a point in time called the "civil twilight".

What are "rabbincally decided times", Alan?

>> What are "rabbincally decided times", Alan?


The times we see mentioned in calendars and newspapers. Someone, somewhere, picked out that moment in time. By the way, Shy guy, how do ==you== decide when Shabbat starts and ends on cloudy/overcast nights? Have you ever been stationed in Alaska, where the sunset can become a 1-hour long process?