"The World" Doesn't Like it When Israel Tells The Truth

Prime Minister Binyamin Netanyahu and Foreign Minister Avigdor Lieberman have some sort of arrangement, that they've formalized by running as one political party in the upcoming Knesset Elections.  This is how they've been running the government for a while.  Lieberman says the "tough stuff" while Bibi plays the "diplomat."  Here's Lieberman's latest:


FM: World would have no problem sacrificing us

Speaking at 'Jerusalem Post' conference, Liberman says Israel "will not be a second Czechoslovakia."

Foreign Minister Avigdor Liberman continued to publicly rebuke Europe on Wednesday, telling a hall full of diplomats attending The Jerusalem Post Diplomatic Conference in Herzliya that many world leaders would be willing to “sacrifice” Israel in an instant.

I agree with Lieberman and have been blogging that for years.  Don't forget nor ignore the fact that the most successful fundraising here is done by Yad Veshem.  People love contributing to Holocaust memorials, and I have no doubt that they'd do the same if G-d forbid there was a reason to memorialize the State of Israel.

Today in Poland, there's a movement in the universities and government to research and try to teach what was Jewish culture and life there, though the Poles were Hitler's most enthusiastic Jew killers.

If the world really cared about the continued existence and security of the State of Israel, then Fatah would be condemned for its policies. 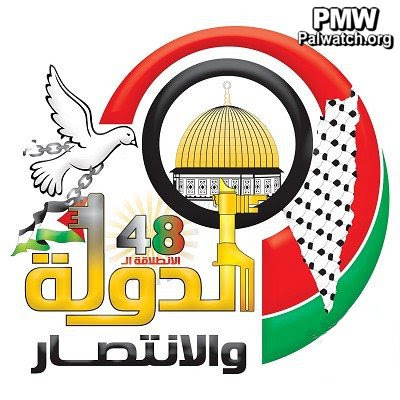 The official Palestinian Authority daily published a picture of the official logo chosen by Fatah for celebrations marking the movement's 48th anniversary. The logo features various symbols, including a map of "Palestine" that includes all of Israel, the number 48, the Palestinian flag, and the slogan for the 48th anniversary: "The state and the victory."

We all know, or we should by now, that there is tacit approval by "the world" for the plans of those Arab terrorists aka Palestinians.  And they have a very simple plan.  It's to destroy, annihilate the State of Israel, G-d forbid.

It's not enough that Bibi sends Lieberman out to proclaim the truth.  I want to hear it straight from the Prime Minister's mouth.  As the situation stands, these strong words are just part of their election campaign.
Posted by Batya at December 13, 2012

Sure, now look what Lieberman faces. He spoke, he's getting taken down. Look which 'world' truly hates when someone speaks the truth.

a, not quite sure what you wrote, but I'm also supporting Eldad and Ben-Ari
Shiloh, I'm glad Lieberman doesn't seem to have this yearning to be liked and loved that Begin had, which was his downfall.

Yes, but A.G. Weinstein, Yemach Shmo, will annihilate Avigdor Lieberman through indictments on trumped up charges. It is the way of a rasha to use subterfuge and chicanery of the legal system to rid the world of his political opponents. Did I say yemach shmo for A.G. Weinstein? Can I include Dorit Beinisch too? Let us be honest. The entire legal system here has to be gutted of its wretched evil soul from the top down to the rubble. I envision the entire Supreme Court building being razed to the ground. There is no redeeming it. Every inch of it has to be burnt to ashes and rebuilt on a foundation of righteousness and decency. May Weinstein and Beinisch rot in Hell. Whenever I think of Beinisch, I think of 15 screaming children being removed from their homes at 2 am in the morning in Migron. Maybe I should say it three times for both Weinstein and Beinisch. Rot in H-ll. Rot in H-ll. Rot in H-ll. Then when we have rebuilt a legal system rooted in some semblance of common decency, I wonder how Mashiach will publicly dispose of these two wretched human beings.

Uh did I mention Menachem Mazuz too? Can I still include him? Pull him out of his bed at 2am too for his ultimate punishment? Is it too late to include him too?

You are right Batya, in my opinion he needs to speak further, like the truth about the fakestinians, but we have a long record of 'tragedies' for the right wing speakers of truth. Pathetic.

Dov, the whole think stinks. How the heck did we get to this point I will never know. The behavior is beyond belief. I expect it for goyim but not Jews, where did we take the wrong turn. We don't see half of the stuff going on either, I am sure of that.

Dov, I would have to certainly think that the Mashiach would have a long list to contend with. The person will have their work cut out for them.

None of the three people mentioned are or were accountable to the Israeli public through our elected officials. Apparently the Prosecutors office here is under the authority of the European Union or the US State Dept. At least they get or received larger paychecks from one of those two "venerable" institutions. We know for a fact that Menachem Mazuz received paychecks in foreign bank accounts from the Ford Foundation to promote gay parades in Yerushalayim. The Ford Foundations besides representing the Jew hatred of its founder Henry Ford, in recent years has been a money laundering organization from the US State Dept. The best way for a journalist to check this is to see if Ehud Barak had been receiving paychecks from the same institutions until his sudden retirement after the surrender from the recent Gaza War because the rules of engagement in that war were dictated by Hillary Clinton.

just saying. Now when will Shabak come knocking at my door?