The "Palestinian" Tragedy of Nakba Day

The Arabs, Leftists, antisemites etc who demonstrate on Nakba Day don't understand what their tragedy really is.  For them it should be a day of mourning.  They totally goofed it. It reminds me of the British officer who decided to ignore the Etzel's warning about a bomb in the King David Hotel should have had done the British equivalent of harikari.  That minimalist  State of Israel had no  plans to "dispel" Arabs.  The Arabs would have  been better off accepting the state then.


In 1948 the Arabs and their British advisers totally miscalculated.  David Ben-Gurion and the Jewish Agency had agreed to the totally indefensible, illogical and dangerous United Nations Partition Plan.  Look at the map: 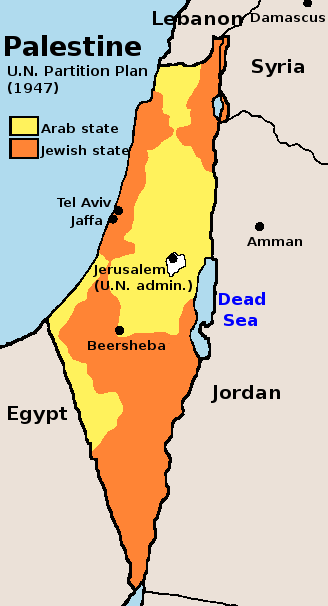 The Plan was accepted by the leaders of the Jewish community in Palestine, through the Jewish Agency.[3][4] The Plan was rejected by leaders of the Arab community, including the Palestinian Arab Higher Committee,[3][5] who were supported in their rejection by the states of the Arab League.
Immediately after adoption of the Resolution by the General Assembly, the Civil War broke out.[6] The partition plan was not implemented.


There was no way that the State of Israel would have survived with those borders.

Nothing has changed in all these years.  The Arabs never wanted to have peace with a Jewish State.  That's why they rejected the Partition Plan.  And unfortunately, Israeli politicians haven't learned their lesson either.  There is nothing we can do to "make peace" with the Arabs.

You can only have peace with those who truly and sincerely want peace, and the Arabs don't want peace with a Jewish State.

So we must stop begging and negotiating and offering them gestures and Land.  We must invest our energies into our own growth.  Those Arabs willing to live in peace will stay and the others will leave.
Posted by Batya at May 16, 2012

As long as Israel has dhimmi leaders who make gestures to Islamic terrorists and kick Jews out of their homes, there will never be peace.

Let's be thankful and not look at the gift horse too closely. If the Arabs were not (thank G-d) as intransigent and extreme as they are, Israel would be in serious trouble.

As a result, Israel's government can't damage the country as much as it would like.

There will only be peace when the arabs come and ask for it and want to join in with the Zionist project of making the most of the land. Some have, it seems, the rest can enjoy their weeds elsewhere.

Incidentally, if you look at a map of Arab villages vacated in 48 you can clearly make out the lines of the partition map. Either those arabs knew/thought there had to be partition, the Jews did, or both. The fact that so many Arab villages remained in the "Arab" part of the post-war Israel shows that at some level the Israeli authorities respected and perhaps still believed in the partition plan.

Norman, a, thanks for the comments. Good points of course.