Israel Can't Accept Everyone! Israel is Supposed to Be a Refuge for JEWS

Recent news has been of rapes by illegals, infiltrators from Sudan and Eritrea who have found their way to Israel in massive numbers.  Ruthie Blum has written an excellent article about this growing and dangerous situation in Israel Hayom.


Over the past two years, more than 60,000 “infiltrators,” mainly from Eritrea and Sudan, have snuck across the Egyptian border into the Sinai Desert...
Some of these Africans have remained in nearby Eilat, managing to find illegal employment in hotels and other establishments for which cheap labor trumps upholding the law.
A greater number moved to a low-income area in Tel Aviv, where they stuffed themselves into small apartments to share the rent, using their earnings from menial odd jobs.

In Israel it is very complicated, because the Israeli Government has accepted the plea of the Sudanese illegals that they are refugees from dangerous countries. And they would be killed if they returned.


Where the Sudanese are concerned, Israel has a justified fear that if they are returned to the Egyptian border from whence they came, they will be abused by Egyptian authorities — or, at the very least, returned to Sudan, where they will meet certain death. Out of deep worry for their welfare, the Israeli government grants them temporary residence permits, which require renewal every three months.
The tragic irony of Israel’s genuinely humanitarian approach to these asylum-seekers is that it has become yet another issue that is both causing tension within the country — and arousing external criticism.

This is not the same as the story of the Vietnamese "boat people" and Israel.  Soon after Menachem Begin was elected Prime Minister of Israel, 1977, he agreed to accept Vietnamese boat refugees an Israeli ship had rescued.  No other country was willing to accept them.  Israel is a small country, so less than a hundred needy people, men, women and children, was no problem. Some are still in Israel, established businesses, and their families grow and thrive.

But close to a hundred-thousand African mostly male infiltrators are a different cup of tea.  As much we may understand that they want to flee, Israel isn't the right address.  Israel is a small country with too many internal, social, cultural and religious problems to offer refuge to masses of non-Jewish men.

Recently there has been a great controversy over the fact that a judge (Arab-Israeli) refused to sing the national anthem, Hatikvah, The Hope.  How a person could be in a position to interpret Israeli Law when he doesn't identify with the anthem and aim raison d'etre of the country, is outrageous.

There has also been more and more talk about changing the lyrics of  Hatikvah to something more "universal" and less Jewish.  This is unfortunately related to the awful act Moshe Dayan did in 1967 after our great victory over our Arab enemies when he ordered that the Israeli Flag be taken down from Har Habayit, The Temple Mount and control be given to the Muslims.

We must not further dilute the Jewish identity of the State of Israel. 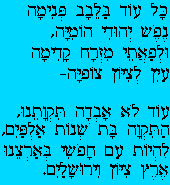 The words to Israel's national anthem were written in 1886 by Naphtali Herz Imber, an English poet originally from Bohemia. The melody was written by Samuel Cohen, an immigrant from Moldavia. Cohen actually based the melody on a musical theme found in Bedrich Smetana’s "Moldau."
Posted by Batya at 8:21:00 PM

I read there are a lot more murders in Israel than are being reported by the media. The victims are other foreign workers who are being murdered by this shadow populace and buried in unmarked graves out in the desert. Israel has a bad habit of making the decision NOT to make a decision as it has done and is doing with their murdering neighbors. Once again Israel procrastinates. The sins of not doing the right thing are piling up.

thanks for the link for the news story about it