Is Today's National Unity Government Like The One in 1967?

There is absolutely no similarity.  In 1967, which I remember much too well, the State of Israel was under attack by Egypt and its allies.  The first shot may have had only been in June, but the war really began the minute Nasser ordered the United Nations peace-keeping forces sic out of the Suez Canal area.


1967 - The Six Day War
In 1966 the Syrian attacks on northern Israel from the Golan Heights intensified, and in the spring of 1967 the armed clashes between the two countries escalated further. Fabricated Soviet reports of alleged concentrations of Israeli troops near the Syrian border made the Arab leaders step up their threats against Israel, and on May 15, 1967 the Egyptian president Nasser ordered his troops across the Suez Canal, into the Sinai Desert. In the following days Nasser expelled the UN peace-keeping force and reimposed the blockade of Eilat.

Israel had to take defensive actions at that point.  At that time, the Israeli public and Knesset was strongly divided among Labor, Herut (Revisionist and former Etzel and Lechi,) religious, communist and Arab parties.  There wasn't much of a "Center."  In my previous post, I quoted from . Abraham Rabinowitch's "The Battle for Jerusalem: An Unintended Conquest That Echoes Still" in which he describes the total panic and debate in the government between the politicians and the IDF on how to react.  It was a wise decision for the sake of the country to establish a national unity government and bring in Opposition Leader Menachem Begin.

Today's Israel and Knesset is a totally different kettle of fish, as the saying goes.  Then we had classic Geffilte Fish, made with both sugar and pepper, while today the government/Knesset is more like a tasteless, overcooked fish stew.  The largest political parties, Likud and Kadima like to consider themselves "Center" are are easily interchangeable.  Many MK's in Likud, Kadima and Avigdor Lieberman's Yisrael Beitenu party have floated around the almost monochromatic political spectrum.

I think that most of the political parties in Netanyahu's bloated coalition are more afraid of elections than they are of our Arab enemies.  Even Bibi's  Likud is, because all the כְּמִתְאֹנְנִים mit'oninim, agitator Korach faux social justice street parties are aimed to raise the voter turnout on the Left. Apathy has been the Left's greatest enemy after small families, (low birthrate.)  I may not agree with Bibi's policies, but he's no dummy and no doubt he knows that the recent polls don't mean that he's a shoo-in.  The agitators have been planning all winter for a long summer of campaign/carnivals.  I considered the proposed September 4 election date to have been a terrible one for us.  The Leftist university students would still be on vacation working hard for the extreme Left.

Democracy has its dynamic and truth.  Only those who care enough vote.  We have to deal with the results.  Many people who voted Likud are totally opposed to Netanyahu's policies.  Honestly, I don't know why they voted for him.  They thought they were voting for those reliably Right, but they got Ehud Barak and Shaul Mofaz instead.  I hope they learned their lesson. 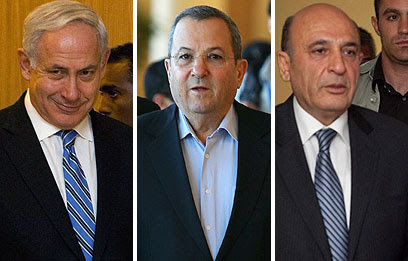 Believe it or not, the answer is yes. In 1967 the male Jewish population in EY for men 20 and up had just risen above 600,000 for the first time since the destruction of the Temples. And G-d wrought a great miracle. Now we stand at the threshold of the ultimate milestone, 6 million Jews in Eretz Yisrael, 72 years after the beginning of the Shoah. It is the final fall back plan to bring about the Final Redemption. If we could not do it by being decent to each other back in 5765, it would happen in spite of our crummy behavior seven years later, in the merit of the 6 million neshamot. from about 70 years ago. Why is 72 important? Because Alot HaShachar is 72 minutes before sunrise. And the Shoah was at Alot HaShachar when Esau displaces the thigh vein. And at sunrise, 72 years later, we are finally healed from our spiritual limp. How does this happen? Well just watch and see the hidden hand of G-d, for this time we are finished with collective tests to pass or fail again. We will only be held accountable as individuals since our leaders in 5765 were such miserable failures.

Support for the religious Zionist parties is not going to appreciably grow in the foreseeable future. I don't think much of Bibi's policies but they are were the Israeli mainstream is and that's where he wants to be. In the old days, there was a dominant Zionist Left and a weak Zionist Right in Israel. Both have disappeared and there is a strong Zionist Center and a weak Religious Zionist Right. Most of the votes will go to the Center in the next election.

You are correct...for now. But the world is about to drastically change by Tisha B'Av G-d willing leaving all political conventional wisdom in the dust.

Norman, even people on the religious right have told me that they think Bibi is correct in his center aim. Not that I agree with them.
Dov, I don't go for those sorts of predictions. Let's see what happens.