Why Haven't The State of Israel and Migron Sued The NIF, Peace Now and Arabs for False Claims?

Since the courts ruled that the Arab ownership of Migron lands are false, shouldn't all those involved in the case be sued?  Yes, that would include the Arabs and their coaches from the New Israel Fund and Appease aka Peace sic Now.

The so-called "compromise" for Migron is a travesty!

Let's use the courts to get real justice! 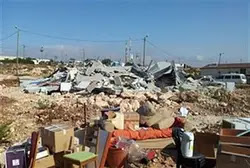