Freedom of Religion, NOT in JORDAN, Where are the Protests?

According to one of the basic Jewish Laws, a man is to pray wearing T'fillin every day.  In many parts of the world it's common to see shlichim,  emissaries from Chabad offering Jewish men the chance to do the mitzvah, even if it's just once with borrowed T'fillin.

Every Monday, Thursday and Rosh Chodesh, you'll see Bar Mitzvah celebrations at the Kotel in which all (most would be a more accurate word I guess) of the men over the age of thirteen with their T'fillin on head and arm. 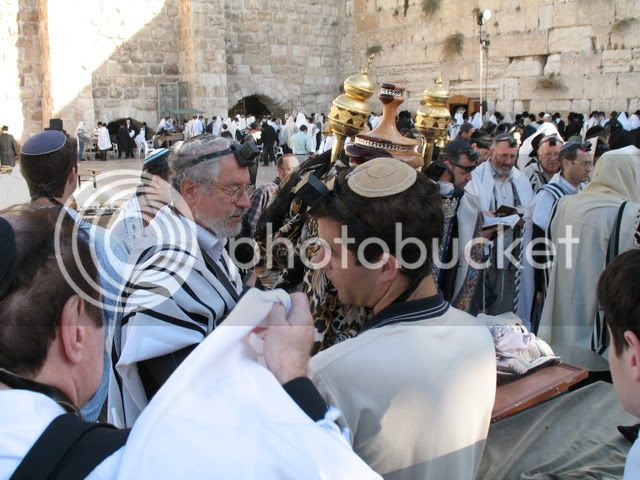 Any country that forbids men from taking T'fillin into its borders is crossing the line of basic human freedom of religion.  All international human, civil and religious rights group should be up in alarm about those countries.  One of them is Jordan.  For some very strange reason, Arab and Muslim countries are coated in Teflon when it comes to human rights.  They have no problems getting away with human/religious/civil rights offenses, especially when it comes to discriminating against Jews.

Jordan also bans Israelis from bringing in food with them.  This is a problem for Jews who only eat kosher food, since they have to buy everything in Jordan from Jordanian shops which aren't kosher.

Now, in all honesty, considering the ban of necessary prayer "equipment" and kosher food difficulties, I don't see the point of going to Jordan and giving money to the Jordanian economy.  And I'd like to see some official protests by Israeli, Jewish and international civil/human/religious rights organizations, especially by those funded by the United Nations.  Let's see some official sanctions against Jordan!
Posted by Batya at January 22, 2012

I suggest that people who enter Jordan and are sympathetic record the encounter and spread it around the Internet, YouTube etc.

This isn't a surprise: after all, when Jordan was created in 1923 it expelled its small Jewish population and since then has forbidden Jewish residents. It's all part of the Arab policy of apartheid.

goyish, why would people go to a place so anti-Jewish?
Bill, that's right. But my point is that this is totally ignored by all the international human/civil/religious rights organizations.

You know, one of the things which caused me to start davening again and increasing my levels of observance is the ridiculous, blatant and totally mainstream nature of the double standards against Jews. You know as well as I do that nobody's going to say word one about Jordan's discriminatory rules, we take that as a given, and every day I read multiple news items and blog posts detailing incidents of obvious Jew-hatred, and to which there ought to be the same sort of international reaction as there is every time Israel or a Jew does something. And the only conclusion I can come to when I think about the staggering injustice and the nature of the double-standard against us, and the fact that even as the media talks utter rubbish about us, we're being accused of secretly running it and forcing it to report only pro-Israel stuff, is that it must be this way because Hashem wants it this way.

The situation is far too ridiculous, the hatred is too long-standing and resilient, the manifestations of it are so far beyond satire and parody for anything else to make sense. Israel's achievements and accomplishments are so amazing, the good it does in the world is so disproportionate and yet so completely dismissed by people who'd rather believe the lies - I just can't see anything but that Hashem has a reason for it being this way. That, plus a few things which even to my skeptical mind made it look like Someone has an eye on Israel, made me think I'd better get back to praying, lighting Shabbat candles, observing chagim, etc. I can believe a lot about humans and human society, but this goes beyond humans.

Shira, good reaction!
I blog about it to say what's necessary. I can't be quiet. Eventually all the little drops will get through. And G-d will know that we're trying and don't give up.