Why Jews should be uncomfortable with Glenn Beck 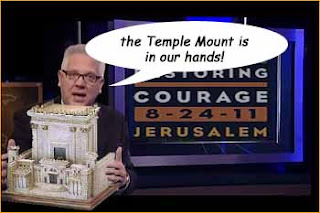 Israelis are about to get overwhelmed with a summer of Glenn Beck. Mr. Beck has big plans for the Jewish state. He is currently in Israel laying the groundwork for a mass pro-Israel happening entitled,"Restoring Courage" which is to take place at the Southern Wall Excavation Site of Jerusalem’s Temple Mount on August 24th. There is something about Glenn Beck that unsettles many Torah observant and secular Zionists, causing them to appropriately shift into a "respect and suspect" mode. Jewish Israel takes an honest look at the man and his plan…more

Rabbi Riskin OK’s Jews to Enter Churches and Learn
A recently featured question addressed to Rabbi Riskin on the Ohr Torah Stone homepage was, "Are Jews allowed to enter churches?" Rabbi Riskin's answer, especially the absolute sanction of evangelical churches, left Jewish Israel with a lot of questions. We explored a number of angles in our search for clarification and have received a letter in response from the Chief Rabbinate… more
Posted by Ellen at July 11, 2011

Great work Ellen, as usual. These series of articles are particular interesting and people should definitely click on the hyperlinks to read the entire articles.

I don't have cable so I know next to little about Beck other than his repetuation as a loud mouth on cable TV.

When I first learned of his visit to Israel I thought it was a mea culp for trivializing the Shoah and comparing his enemies to Nazis persecuting Jews. A number of rabbis took out newspaper ad condemning him for this.

If he's coming with evangelicals, I'd bee very leery. Any person that comes on this strong is suspicious to me.

On a side note, I sort of cringe when I hear about something to restore courage to Israel. I get the visual impression of the little orphan girl from Les Miserable poster.

Why must these evangelicals portray Israel as a forgotten and helpless child that only xtians can comfort and save?

Wow. Rabbi Riskin's views on Jews entering churches really shocked me. Did he really mean that it is okay to go to a church service if it's educational (to learn about Christianity?)

I don't buy into his arguments about the evangelical churches not having statues and icons as mainstream protestant and Catholic churches do.


"We took a quick look online and saw that in August 2008, the Jewish Chronicle posed the same question, “Is it forbidden for Jews to enter a church?", to both an Orthodox and a Reform rabbi.

In that article, Orthodox Rabbi Naftali Brower upheld the prohibition of entering churches based on halachic sources and expressed concern about the impression a church experience would leave on a Jew:


"One cannot simply enter a church without some aspect of the church entering you. To put it another way: by entering a church, one enters into a Christian religious experience."

Why people should suspect Beck is beyond me. He's a righteous Gentile. He's christian - so what? He stands by israel and Jewish people with self-sacrifice, in sharp contrast to the rest of the mainstream leftists media here in the U.S.A. G-d bless him. He knows Jews and Israel are the world's canary in the mine and takes his convictions seriously.

In the Vanguard I tend to agree with you about Glen Beck. I have been watching his Show via the internet now for over a year. I wish people would comment based on what they actually heard and saw and not on what others have said. From what I have seen he is a riteous gentile. Appealing to all to look to G-d and not to government. He wants to encourage people to act honorably and ethically. If you are interested most of his shows can be viewed via thedailybeck.com. Judge for yourself. By the way I am a jewess from Australia who found his shows by accident. I wish their were more like him. I wish there were more jews who would be able to proclaim their belief in Hashem as proudly as he does.

Keli Ata,
As always, you make some interesting points. I think all Israelis find the the title "restoring courage" to be a little off for a rally in Israel. Although Beck has explained that the title is not meant for Israelis.

"Why must these evangelicals portray Israel as a forgotten and helpless child that only xtians can comfort and save?"

In the Vanguard and the Graduate,
Based on your comments, I'm not sure you read the full report at Jewish Israel.

We recognize Mr. Beck as being heartfelt, sincere and very articulate on behalf of Israel, but there are problems.
The report goes a bit deeper than your feedback suggests and takes a look at our responsibilities as Jews.

Ellen, he is a christian. Why would we expect him to not act according to his faith. Why do we get annoyed at jews who try to be inclusive like Rabbi Riskin and then become suspicious of christians who are acting in accordance with their faith and not being "sensitive and inclusive" . At no point has he asked jews to become christian or to act againts judaism. He is not acting as a trojan horse espousing one thing and then once he has everyone off guard evangalising a form of messianic Judaism. From everything I have heard he does as he says. A rare comodity. I admire this. As the jewish Israel report suggest perhaps the real issue is that there are not enough jews who are capable of doing what he is doing. We should be leading the way. We should be the light unto the nations highlighting evil. Instead we spend most of the time apologising for our existance or bickering between ourselves.

Glad you read the full report, Graduate, and that you picked up on the essential point of Jews needing to take the lead and responsibility here.

If you notice, we aren't asking Beck to betray his Christian faith, nor did we accuse him of being a trojan horse or of overt proselytizing.

We are, however, respectfully asking that Mr. Beck be aware that many Torah observant as well as secular Zionists are uncomfortable with the Christian theological direction and doomsday focus of some of his oratory. And that, while he stands with Jews in Eretz Israel, a focus on morality, rather than religious faith, would be a more appropriate stance and could heal and inspire hope rather than exacerbate political rifts and divisiveness?

We also ask that he respects a Jew's right to be alone , and that the interfaith bonding thing has its limits -especailly for Torah observant Jews.

With regards to Rabbi Riskin and Beck, I don't think we can compare an Orthodox rabbi's break with tradition over interfaith and halachic matters with a non-Jewish media personality's approach.

Beck does not meet the legal, halachic definition of "righteous gentile." Also, he claims to be the source of Truth while practicing a false religion. This is incompatible with Torah Truth which is the only Truth that matters to us. There are Jewish voices saying what needs to be said, but the unadulterated Truth will never have the power of a Glenn Beck until Mashiach comes. More proof that there is something wrong with Glenn. You don't get that kind of media power by being a good guy.

I'd just like to add that we had a Jewish advocate that was miles and years ahead of the likes of Glen Beck---Rabbi Meir Kahane. And they murdered him after they villified him. Why should Hashem send another when we have yet to learn anything from our prior mistakes? Jews are not ready to hear the Truth from a Jew. It embarrasses them. This is like preferring Bilaam (Beck) to Moshe Rabeinu. The real thing is so far superior...

Here is what Israel Matzav says about Glenn Beck....
http://israelmatzav.blogspot.com/2011/07/video-glenn-beck-addresses-knesset.html#links

Ellen, thanks for posting it. We mustn't put our faith in non-Jewish leaders.

I sense your fear, although I feel here it's misplaced. You may not want to place your faith in Gentiles - but you needn't malign them either.

Vanguard, where did Ellen or Batya "malign" gentile supporters?

In the vanguard: "Fear" Beck? No. Fear G-D! This bowing to the goyim which defames His Name is likely to bring very unintended consequences from Shamayim. From that direction there is what to fear.

Where do they malign Mr. Beck?

Look closer at the picture, will you? They fear he's taking the Holy Mount into his possession, do they not?

Actually this whole story against Beck is what we all "empty words" - just said for the sake of talking.

As of late he has spent a tremendous amount of broadcast time focused on the Temple Mount.

His recent remarks at a VIP reception in Jerusalem were almost exclusively centered on the Temple Mount.

Under the circumstances, I would say the picture is appropriate and in keeping with Mr. Beck's style

On the contrary, Vanguard, the accompanying graphic maligns us Jews and justifiably so.

You feel there's nothing wrong with (yet another) pagan pageant gathering literally at the footsteps of Har HaBayit, of our Beit Hamikdash?

Thanks for proving the point.

For those interested, I was just sent an article penned by Moshe Feiglin of Manhigut Yehudit. It seems he received an invitation to the VIP reception for Glenn Beck, and he opted out of attending.
This is well-worth a read.
http://www.jewishisrael.org/eng_contents/update/5771/7142.htm#Nation

Note: Manhigut's website is Jewishisrael.org, bit it's not connected to our efforts and site at Jewishisrael.com

Well, I changed my mind. I do now see what would make me fret as well. I had let the words of Ruth, which he quoted, go unchecked, because I thought he was simply ignorant of what a real GIORET would feel. But on second thought, the words are plain, simple and the English translation too is simple and accurate - so him saying his god is our God is disingenuous, and his people are our people too might mean, if said with hidden agenda, that he intends to push or wish for our conversion.

But, I still want to give him some credit, based on his past great support for Jews and Israel, and say that maybe he is a somewhat of an ignoramous when he quoted Rut.

Ot to the sotry, but I thought it was hard to ascend the temple mount. Is it easier to gain access now? I recall reading that people were restricted.

We didnt listen to a jew 25 years ago rav kahane , were ruled by the amalak within the erev rav so we have a xtian lover of Israel come and save us . We get what we deserve for killing the prophet kahane and voting for the swine in knesset we vote for year after year . Of course the xtians will save us they believe in the old testament more then we did when we ignored and killed kahane . Yoav David