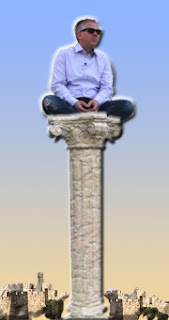 Another Beck Column
Anita Tucker, Jewish Israel's Community Affairs Advisor, was present at a reception held for Glenn Beck in Maale Zeitim where she had a chance to speak with a number of philanthropists, activists, reporters and politicians, as well as the people who brought Beck to Israel.
We review her impressions, as well as Mr. Beck's remarks and Israel's hasbara challenges...more

Moshe Feiglin and others in the Manhigut Yehudit faction of the Likud Party opted out of the Beck reception. Feiglin explained why in a widely published article that has sparked a fierce debate.

It's the 17th of Tammuz. The three weeks are upon us, a period in which we remember events related to the destruction of the First and Second Temples. Among the tragedies commemorated are those directly related to avodah zarah, blasphemy and desecration.

If this uncomfortable debate surrounding Glenn Beck's plans for 8/24 in Jerusalem can challenge us Jews to think critically, and to remember who we are, where we are standing, and the obligations incumbent upon us, then we can truly thank Mr. Beck.

Jewish Israel wishes Am Yisrael a meaningful Fast.
Posted by Ellen at 10:22:00 PM

Wonderful and comprehensive coverage and analysis of the Beck situation!

I did click on all of the hyerlinks and the articles were quite interesting and at times disturbing. The videos on JI of Beck are definitely worth watching.

Lots and lots of thoughts went through my head.

I'm surprised by the pounding Moshe Feiglin has gotten. I didn't think his article was inflammatory in the least. He was right in taking issue with Beck's comment about Ruth.

I'd imagine many of the comments come from Beck supporters although a the majority of Jewish commenters also expressed views that Christians are the only friend of Israel.

(My brother is an agnostic and supports Israel).

I'm pleased that the rally is being moved from the Temple Mount. Beck's explanation that he was worried that his rally in Washington would trigger a "civil war" and the Restore Courage rally could trigger "World War II" are melodramatic and no doubt he'll protray himself as a victim.

People are already calling him brave. Haven't a number of American artists gone to Israel to give concerts? As I recall Paul McCartney was threatened by Hamas and McCartney still performed.

Going back to the Moshe Feiglin article: many commenters described Beck as a righteous gentile. He's a good man. I'm being picky but I don't think that term should be tossed around losely.

When I hear it I immediately think of the gentiles who literally saved Jews in the Holocaust, and people like Sandra Samuel who saved Moshe Holtzberg, and Noachides.

OT: I've changed my email addresses a few times since I last signed in to JI. I can't remember which ones I used. Should I reapply as a member with my new email address?

Cogent comments, Keli Ata.
You seem to have a very good feel for the situation.

I'm not politically affiliated with Moshe Feiglin's faction, but I think a lot of the extreme (unfair?) vitriol against Feiglin with regards to his thoughtful oped on Glenn Beck is coming from those who oppose him politically.

Like we said in our recent column:
"What is also disturbing is that even the most delicately handled and thoughtful criticism of Jewish dependence on gentile sources is dismissed as being an attack on our Christian friends and automatically draws out legions of absolute and unquestioning Jewish loyalists. But those Jews are missing the point, as nobody is really accusing Beck of anything terrible. We are, however, asking Jews to turn inward and to begin to examine how their relationship and dependence on devout and supportive Christians is eroding, weakening and challenging Judaism and the Jewish state spiritually."

Ellen, you might want to check out this video regarding Glenn Beck's views on Reform rabbis.

In his "apology" Beck apologizes IF anyone was offended.

IF?? Comparing any branch of Judaism with radicalized Islam.

You might want to add this video to JI's Beck videos: