The Israeli media is now full of 1984-style programs and statements in memory of their idol, Yitzchak Rabin.  In contrast, many of us remember a different Rabin and a different Israeli History.

Yitzchak Rabin was a David Ben Gurion loyalist, a Palmach officer, an IDF (Israel Defense Forces) Chief of Staff, twice Israel's Prime Minister, who was murdered (assassinated) after a public appearance at a Left wing rally, fourteen years ago.  Since then Israel's Left, media, politicians, academics etc have used it as the springboard, justification for massive character assassination against anyone who dares to disagree with their opinions and ideology.

If this was literature, instead of history, it would be written as a classic case of poetic justice, "...a literary device in which virtue is ultimately rewarded or vice punished, and often in modern literature by an ironic twist of fate intimately related to the character's own conduct." 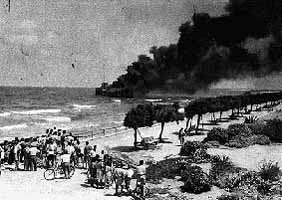 That brings us to the Altalena, a tragedy caused by vile hatred of Jew against Jew.  It dwarfs the despicable sezon, when Ben Gurion's followers gave names of fellow Jews to the British to have them arrested and worse.

In 1948, Menachem Begin's Irgun had managed to buy much-needed arms for the battle for Israel's Independence.  An agreement had been reached with the new provisional government concerning how they were to be used and distributed, with a priority for freeing Jerusalem's Old City.  But David Ben Gurion tricked him and ended up sending his soldiers, including Yitzchak Rabin, to attack the ship, sink the weapons and murder Jews.


"Begin had meanwhile boarded the Altalena, which was now heading for Tel Aviv. He hoped that it would be possible to enter into a dialogue with the Provisional Government and to unload the remaining weapons peacefully. But this was not the case. Ben-Gurion ordered Yigael Yadin (acting Chief of Staff) to concentrate large forces on the Tel Aviv beach and to take the ship by force. Heavy guns were transferred to the area and at four in the afternoon, Ben-Gurion ordered the shelling of the Altalena. One of the shells hit the ship, which began to burn. There was danger that the fire would spread to the holds which contained explosives, and the captain ordered all aboard to abandon ship. People jumped into the water, whilst their comrades on shore set out to meet them on rafts. Although the captain flew the white flag of surrender, automatic fire continued to be directed at the unarmed survivors. Begin, who was on deck, agreed to leave the ship only after the last of the wounded had been evacuated."


The late Shmuel Katz, told me that he had always believed that the main goal of the attack was to assassinate Menachem Begin, whom Ben Gurion considered his strongest rival.  Menachem Begin, always the noble gentleman, in his naive innocence could never accept such a theory, nor would he demand apologies and cheshbon nefesh, accounting of the soul, from those who attacked him and his followers.

In Psychology there's a principle called projection, "Projection also appears where we see our own traits in other people..."  That explains why Menachem Begin and Israel's pro-Jews in the Land of Israel Right wing do not constantly verbalize character assassination and incitement against the Left, but the Left always does it against the Right.

The Israeli Left has a documented history of discrimination and violence, for example the Altalena and Amona, against the Right, though they have no problems constantly proclaiming us as violent and guilty of attacking fellow Jews.

Israeli society is still suffering from pre-State hatreds and the Yitzchak Rabin murder is being utilized as a tool against a large and growing segment of the Israeli public.  I don't know if we'll ever really know who was behind that assassination.  I just know that the Left has enthusiastically adopted it as their mantra, their weapon of choice against loyal and innocent Jewish citizens.
Posted by Batya at October 30, 2009

thank you very much for the reminder of just who Rabin was. Rabin week has begun. Wonder how long people will be able to suffer this long winded propaganda... it's sort of like the Christmas season in America.

I wish it was different. I presume you're referring to the blood libel...

LOL! A few years ago, my wife and I were in the US in December. We had some serious shopping to do.

Every store was playing the same Christmas songs over and over again. I seriously wanted to rip the speakers out of the ceiling if I would have heard Dean Martin singing "Let It Snow" one more time.

Look what it did to Santa!

BTW, my post above is indicative of about how seriously we or anyone we know take this Rabin nonsense year after year.

Wasn't it also poetic justice that Rabin was liquidated by a "right-winger" when he had been secretly provoking and inciting the right for weeks, so as to encourage them to do something outrageous and "embarass Bibi" and cause Bibi to lose the election? Hasn't this been well-documented in Israel?

"The provocation was a success...But our candidate died!"

While the great Begin died peacefully in his bed.

Shy, xmas is so commerical in America. So is every holiday. You should have seen all the pumpkins on display in Oct in NY.

Jewish Odysseus, actually, I have my doubts about Yigal Amir's total guilt. Avishai Raviv was involved and he's Shabak. He was even part of the interrogation of some of Yigal's classmates, as part of the police. But for sure he was killed by a Jew. No one doubts it.

Batya, I know Amir was Jewish and pulled the trigger, I didn't mean to imply there was some larger conspiracy to kill Rabin.

I just saw some poetic justice that Rabin's dirty anti-Bibi tricks may well have contributed, unintentionally, to his own death.

Actually, I think that it was more than just Yigal Amir. I have no doubt.

Obysseus, go buy yourself a DVD.