Who Really Won the 2018 American Elections 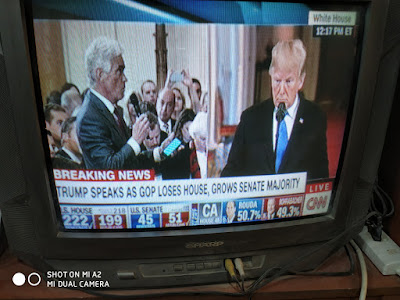 Just a short time ago I watched the press conference with US President Donald Trump. Of course the hot topic was the 2018 American Elections, specifically the results in the Senate and Congress.

Simply put, both parties won, since the Democrats now control the House (Congress,) while the Republicans control the Senate. Superficially, that makes it look pretty even. But IMHO, this was much better for the Republicans. There's a simple reason for that.

Congressmen/women serve two years, while Senators serve six years. Those senators elected are in for three times as long and can get a lot more done. Congressmen/women spend most of their time campaigning. The newly elected ones barely get to know their way around when they have to campaign again, since the 2020 elections are coming up. And the 2020 elections are also US Presidential elections. And the year before that, there are primaries.

Congress will be very busy with things other than their official jobs.

Time to pull up on a comfortable seat and watch the fun.
Posted by Batya at November 07, 2018

Batya Medad, this is one of your BEST blog posts!

First, I appreciate your logic; Spock could not have done better.

Second, there is something attractive about short blog posts.
We live in a time when few people want to read long essays.
Maybe Russians are different, but Americans love brevity.

Nor are animals safe: a sniper rifle
sight using thermal imagery captured
two Taliban fighters satisfying
themselves with a donkey.”

Thank you so much. I know that most people don't have patience to read.
About the results, it's a "pennywise pound foolish" situation.

USA in upheaval. Gd willing the fallout won't reach here in the Holyland.

Thank you, that is a very commonsense way to look at the situation. Very calming.

Thanks, hope it helps.